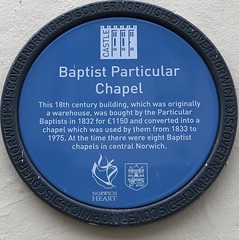 Baptist Particular Chapel This 18th century building, which was originally a warehouse, was bought by the Particular Baptists in 1832 for £1150 and converted into a chapel which was used by them from 1833 to 1975. At the time there were eight Baptist chapels in central Norwich.

Timberhill, Norwich, United Kingdom where it was