Jane Austen (/ˈɒstɪn, ˈɔːs-/; 16 December 1775 – 18 July 1817) was an English novelist known primarily for her six major novels, which interpret, critique and comment upon the British landed gentry at the end of the 18th century. Austen's plots often explore the dependence of women on marriage in the pursuit of favourable social standing and economic security. Her works critique the novels of sensibility of the second half of the 18th century and are part of the transition to 19th-century literary realism. Her use of biting irony, along with her realism and social commentary, have earned her acclaim among critics and scholars. With the publication of Sense and Sensibility (1811), Pride and Prejudice (1813), Mansfield Park (1814) and Emma (1816), in her lifetime she achieved modest success and, as the books were published anonymously, little fame. She wrote two other novels, Northanger Abbey and Persuasion, both published posthumously in 1818, and began another, eventually titled Sanditon, but died before its completion. She also left behind three volumes of juvenile writings in manuscript, the short epistolary novel Lady Susan, and another unfinished novel, The Watsons. Austen gained far more status after her death, and her six full-length novels have rarely been out of print. A significant transition in her posthumous reputation occurred in 1833, when her novels were republished in Richard Bentley's Standard Novels series, illustrated by Ferdinand Pickering, and sold as a set. They gradually gained wider acclaim and popular readership. In 1869, fifty-two years after her death, her nephew's publication of A Memoir of Jane Austen introduced a compelling version of her writing career and supposedly uneventful life to an eager audience. Austen has inspired a large number of critical essays and literary anthologies. Her novels have inspired many films, from 1940's Pride and Prejudice to more recent productions like Sense and Sensibility (1995) and Love & Friendship (2016). 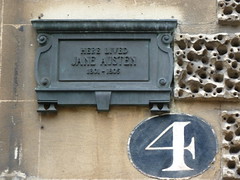 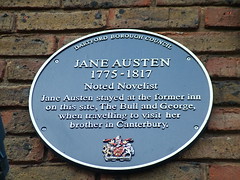 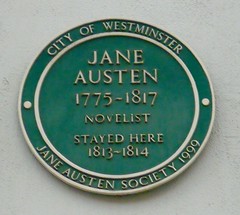 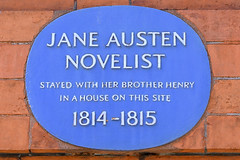 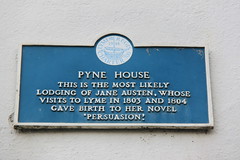 The Jane Austen Garden Lyme Regis was part of the setting for the novel Persuasion by J...
Lyme Regis, United Kingdom 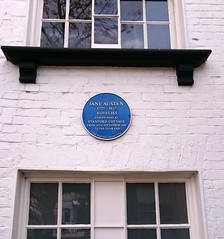 This is the site of All Saints Church destroyed in 1940 during the blitz on the city in...
Jane Austen Heritage Trail #2
Southampton, United Kingdom

Jane Austen 1775-1817 noted novelist. Jane Austen stayed at the former inn on this site, The Bull and George, when travelling to visit her brother in Canterbury

Jane Austen novelist, stayed with her brother Henry in a house on this site 1814-1815

8 College St, Winchester, United Kingdom where they lived and died (1817)

Pyne House. This is the most likely lodging of Jane Austen, whose visits to Lyme in 1803 and 1804 gave birth to her novel "Persuasion".

The Jane Austen Garden Lyme Regis was part of the setting for the novel Persuasion by Jane Austen who lodged in the town in 1804. The garden was opened by Sir Hugh Smiley Bt chairman of the Jane Austen Society in 23rd April 1975

The Jane Austen Garden. Opened by Sir Hugh Smiley Bt in 1975 Chairman of the Jane Austen Society. Restored by Lyme Regis Town, District and County Council with help from this Society. Jane Austen lodged in Lyme for some months in 1803/04. She used the Cobb, town and surrounding countryside for the setting for part of Persuasion written in 1815/16

Jane Austen lived here from 1809 - 1817 and hence all her works were sent into the world. Her admirers in this country and in America have united to erect this tablet. Such art as hers can never grow old

Behind here stood the Assembly Rooms where the novelist, Jane Austen, attended dances when living in Steventon 1775-1801

JANE AUSTEN Author: 1775-1817 THE PLATFORM (THE BEACH) Georgian Southampton was a Spa Resort. Running East from this spot was a waterside promenade for visitors and citizens to take daily exercise. Jane and her family frequently walked along this shore (1806-1809), sometimes as far as Cross House Quay, where where the Itchen Ferry operated. On 16 September 1807 the Austens used the ferry to visit Netley Abbey. In the winter the meadows froze and Jane's brother skated here.

JANE AUSTEN Author: 1775-1817 WATERGATE & QUAY Jane's niece, fourteen year old Fanny Knight, records in her diary of Tuesday, 15 September 1807, that Jane and the rest of the family embarked from here to visit friends in Hythe for afternoon tea. Fanny writes 'Mama to everyone's astonishment was of the party and not at all sick'

High Street, Southampton, United Kingdom where they sailed from (1807)

JANE AUSTEN Author: 1775-1817 JANE AUSTEN'S HOUSE Janes's home from 1807 to 1809 was cited here in Castle Square. The house was rented from the Marquis of Lansdowne, who lived opposite in his mock-Gothic castle. The Austen's garden stretched back to the town walls, affording extensive views of the New Forest. At that time the River Test, at high tide, reached the base of the walls.

JANE AUSTEN Author: 1775-1817 The Jane Austen Heritage Trail begins here. In the Spring of 1783, at the age of seven, Jane, her sister Cassandra and their cousin Jane Cooper, attended a school nearby run by Mrs Ann Crawley. The exact location of this school is unknown. An outbreak of Typhus closed the school after only a few weeks, and the girls returned home to Steventon, Jane's birthplace in the north of Hampshire.

JANE AUSTEN Author: 1775-1817 DOLPHIN HOTEL It is said that Jane celebrated her 18th birthday here in the ballroom of the Dolphin on 16 December 1793 with her brother Frank. Jane was staying with her cousins, the Butler-Harrisons, in St Mary's Street. John Butler-Harrison was twice Mayor of Southampton. When she was living in Southampton in the winter of 1808/09, according to Jane's letters, she attended two other dances at the Dolphin ballroom, a beautiful bow-windowed room on the first floor.

This is the site of All Saints Church destroyed in 1940 during the blitz on the city in World War II. It was here that Jane Austen worshipped during her stay in Southampton

Jane Austen author: 1775-1817. The Long Rooms & Hot Baths. Built in 1767 on the shore-line outside the town walls, The Long Rooms and Hot Baths were the fashionable centre of Southampton as a spa resort. The Lance Family of Chessel House, Bitterne (where Lances Hill preserves their name), invited the Austens to a dance in The Long Rooms in January 1807, shortly after they had moved into their new home in Castle Square.

Jane Austen author: 1775-1817. Site of the Theatre Royal. The Theatre Royal had been built by the proprietor, Mr Collins, in 1798. The Austen Family visited the theatre here in Monday 14 Septembet 1897, to see two plays, 'The Way To keep Him' and 'Of Age Tomorrow', in which Mr John Bannister (1790-1836) played leading roles. The Austens were fond of the theatre and Jane wrote plays to entertain her family and friends.