Elizabeth Ann Sheridan (née Linley) (September 1754 – 28 June 1792) was a singer who possessed great beauty. She was the subject of several paintings by Thomas Gainsborough, who was a family friend, Joshua Reynolds and Richard Samuel. An adept poet and writer, she became involved with the Blue Stockings Society and participated in Whig politics. The second of twelve children, and the first daughter of the composer Thomas Linley and his wife Mary Johnson, Elizabeth was herself the wife of the leading playwright Richard Brinsley Sheridan. She was one of the most noted soprano singers of her day, though her husband discouraged her from performing in public after their marriage. Her early life was spent in Bath, the town of her birth, and she probably first appeared on stage beside her brother, Thomas, in 1767 although she started singing in concerts when she was nine years old. The Maid of Bath, a comedy that dramatised and ridiculed her life story, played for 24 nights at the Haymarket Theatre in 1771. An engagement to a wealthy elderly suitor at the end of 1770 was called off just prior to the anticipated wedding; Elizabeth later eloped to France with Sheridan and a marriage ceremony may have taken place in March 1772 although no records of the matrimony exist. The couple returned to Britain in late April and a formal marriage took place in 1773. Sheridan defended Elizabeth's honour twice during 1772 in duels with a married man, "Captain" Thomas Mathews, who had amorously pursued her. The Sheridans' relationship was stormy, and both parties had affairs; Elizabeth also had several miscarriages and a stillborn baby before producing a son, Thomas, born in November 1775. One of Elizabeth's lovers was Lord Edward FitzGerald who was the father of her daughter born on 30 March 1792. Elizabeth had suffered ill-health for some time, which the traumatic labour exacerbated. She died of tuberculosis on 28 June 1792. 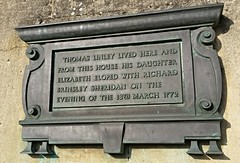 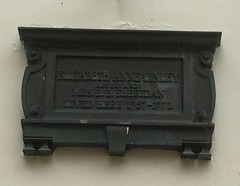 11 Royal Crescent, Bath, United Kingdom where they eloped and lived