Anne Isabella Noel Byron, 11th Baroness Wentworth and Baroness Byron (née Milbanke; 17 May 1792 – 16 May 1860), nicknamed Annabella and commonly known as Lady Byron, was an English mathematician and the wife of poet George Gordon Byron, more commonly known as Lord Byron. A highly educated and strictly religious woman, she seemed an unlikely match for the amoral and agnostic poet, and their marriage soon ended in acrimony. Lady Byron's reminiscences, published after her death by Harriet Beecher Stowe, revealed her fears about alleged incest between Lord Byron and his half-sister. The scandal about Lady Byron's suspicions accelerated Byron's intentions to leave England and return to the Mediterranean where he had lived in 1810. Their daughter Ada worked as a mathematician with Charles Babbage, the pioneer of computer science. Lady Byron had felt that an education in mathematics and logic would counteract any possible inherited tendency towards Lord Byron's perceived insanity and romantic excess. 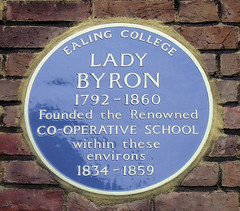