George Gordon Byron, 6th Baron Byron FRS (Greek: Λόρδος Βύρων, romanized: Lórdos Výron; 22 January 1788 – 19 April 1824), simply known as Lord Byron, was an English poet and peer. One of the leading figures of the Romantic movement, Byron is regarded as one of the greatest English poets. He remains widely read and influential. Among his best-known works are the lengthy narrative poems Don Juan and Childe Harold's Pilgrimage; many of his shorter lyrics in Hebrew Melodies also became popular. He travelled extensively across Europe, especially in Italy, where he lived for seven years in the cities of Venice, Ravenna, and Pisa. During his stay in Italy he frequently visited his friend and fellow poet Percy Bysshe Shelley. Later in life Byron joined the Greek War of Independence fighting the Ottoman Empire and died leading a campaign during that war, for which Greeks revere him as a folk hero. He died in 1824 at the age of 36 from a fever contracted after the First and Second Sieges of Missolonghi. His only legitimate child, Ada Lovelace, is regarded as a founding figure in the field of computer programming based on her notes for Charles Babbage's Analytical Engine. Byron's extramarital children include Allegra Byron, who died in childhood, and possibly Elizabeth Medora Leigh, daughter of his half-sister Augusta Leigh. 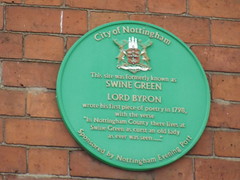 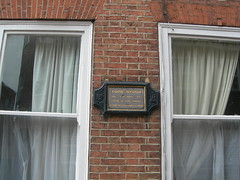 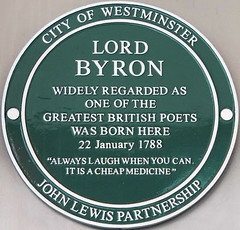 Seaham Hall built in 1792 on the site of an old manor house. This hall has hosted royal...
Seaham, United Kingdom 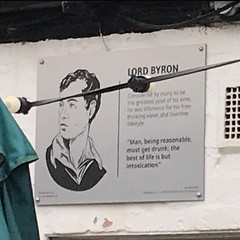 This site was formerly known as Swine Green Lord Byron wrote his first piece of poetry in 1798, with the verse "In Nottingham County there lives at Swine Green as curst an old lady as ever was seen....."

Cape - Pelham Street, Nottingham, United Kingdom where they lived and wrote his first piece of poetry (1798)

Burgage Manor, The Burgage, Southwell, United Kingdom where they lived (1803-1808)

Lord Byron, widely regarded as one of the greatest British poets was born here 22 January 1788 "Always laugh when you can. It is a cheap medicine"

Hotel d’Angleterre, Lausanne, Switzerland where they was (1816)

Seaham Hall built in 1792 on the site of an old manor house. This hall has hosted royalty, Prime Ministers and many illustrious guests including the poet Lord Byron

"Clinton Arms" Hotel known as the "Cardinals Hat" in the 14th and 15th centuries and as The Kings Arms during the 16th to early 19th centuries. Lord Byron stayed in this building during 1806 and 1807 when two volumes of his poems were being printed in Newark. W. E. Gladstone addressed Newark electors from a window in this hotel when returned as Conservative MP in 1832. An important posting inn during coaching days.

Lord Byron (1788-1824) Considered by many to be the greatest poet of his time, he was infamous for his free thinking views and libertine lifestyle. "Man, being reasonable, must get drunk; the best of life is but intoxication"

The Trip To Jerusalem, Brewhouse Yard, Nottingham, United Kingdom where they was