Stan Laurel (born Arthur Stanley Jefferson; 16 June 1890 – 23 February 1965) was an English comic actor, writer, and film director who was part of the comedy duo Laurel and Hardy. He appeared with his comedy partner Oliver Hardy in 107 short films, feature films, and cameo roles. Laurel began his career in music hall, where he developed a number of his standard comic devices, including the bowler hat, the deep comic gravity, and the nonsensical understatement. His performances polished his skills at pantomime and music hall sketches. He was a member of "Fred Karno's Army", where he was Charlie Chaplin's understudy. He and Chaplin arrived in the United States on the same ship from the United Kingdom with the Karno troupe. Laurel began his film career in 1917 and made his final appearance in 1951. He appeared with his comic partner Oliver Hardy in the film short The Lucky Dog in 1921, although they did not become an official team until late 1927. He then appeared exclusively with Hardy until retiring following his comedy partner's death in 1957. In April 1961, on the 33rd Academy Awards, Laurel was given an Academy Honorary Award for his pioneering work in comedy, and he has a star on the Hollywood Walk of Fame at 7021 Hollywood Boulevard. Laurel and Hardy were ranked top among best double acts and seventh overall in a 2005 UK poll to find the Comedians' Comedian. In 2019, Laurel topped a list of the greatest British comedians compiled by a panel on the television channel Gold. In 2009, a bronze statue of the duo was unveiled in Laurel's home town of Ulverston. 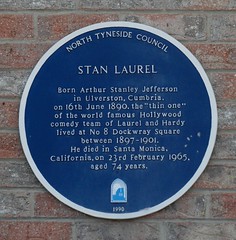 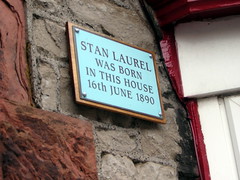 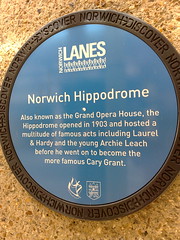 Laurel & Hardy This plaque commemorates the 50th anniversary of their appearance in Sou...
Southend-on-Sea, United Kingdom 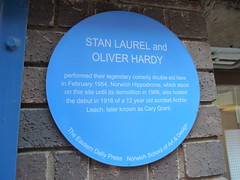 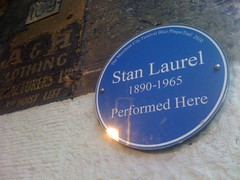 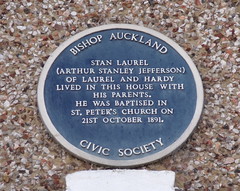 Stan Laurel. Born Arthur Stanley Jefferson in Ulverston, Cumbria on 16th June 1890, the "thin one" of the world famous Hollywood comedy team of Laurel and Hardy lived at No 8 Dockwray Square between 1897-1901. He died in Santa Monica, California, on 23rd February 1965, aged 74 years

Argyle Street, Ulverston, United Kingdom where they was born near (1890)

Gainford Academy 1818-1899. Gainford Academy was founded in 1818 by the congregational minister the Rev. William Bowman. It operated from this building until 1899 when it was moved to North Terrace. In 1864 there were 80 boarders. The most famous pupil of the academy was Arthur Stanley Jefferson (Stan Laurel) of Laurel and Hardy fame. The building was later acquired by the Edleston family who gave it to the village in 1964. The building was restored for housing in 1987.

3 Argyll Street, Ulverston, United Kingdom where they was born (1890)

Stan Laurel (Arthur Stanley Jefferson) of Laurel and Hardy lived in this house with his parents. He was baptised in St. Peter’s Church on 21st October 1891.