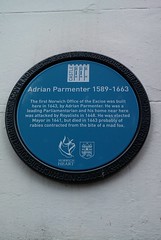 Adrian Parmenter 1589-1663 The first Norwich Office of the Excise was built here in 1643, by Adrian Parmenter. He was a leading Parliamentarian and his home near here was attacked by Royalists in 1648. He was elected Mayor in 1641, but died in 1663 probably of rabies contracted from the bite of a mad fox.

Timberhill, Norwich, United Kingdom where they built the first Norwich Office of the Excise