Robert Burns (25 January 1759 – 21 July 1796), also known familiarly as Rabbie Burns, was a Scottish poet and lyricist. He is widely regarded as the national poet of Scotland and is celebrated worldwide. He is the best known of the poets who have written in the Scots language, although much of his writing is in a "light Scots dialect" of English, accessible to an audience beyond Scotland. He also wrote in standard English, and in these writings his political or civil commentary is often at its bluntest. He is regarded as a pioneer of the Romantic movement, and after his death he became a great source of inspiration to the founders of both liberalism and socialism, and a cultural icon in Scotland and among the Scottish diaspora around the world. Celebration of his life and work became almost a national charismatic cult during the 19th and 20th centuries, and his influence has long been strong on Scottish literature. In 2009 he was chosen as the greatest Scot by the Scottish public in a vote run by Scottish television channel STV. As well as making original compositions, Burns also collected folk songs from across Scotland, often revising or adapting them. His poem (and song) "Auld Lang Syne" is often sung at Hogmanay (the last day of the year), and "Scots Wha Hae" served for a long time as an unofficial national anthem of the country. Other poems and songs of Burns that remain well known across the world today include "A Red, Red Rose", "A Man's a Man for A' That", "To a Louse", "To a Mouse", "The Battle of Sherramuir", "Tam o' Shanter" and "Ae Fond Kiss".

Founded by James Chalmers in January 1748 as the "Aberdeen's Journal" and originally pr...
Aberdeen, United Kingdom 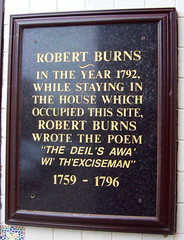 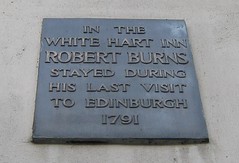 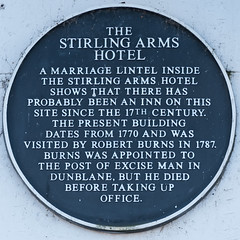 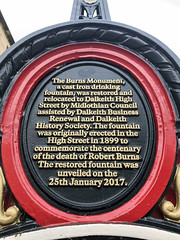 Robert Burns, poet. Stayed in the Ettles Hotel, near this spot, on his visit to Inverness in September 1787.

Founded by James Chalmers in January 1748 as the "Aberdeen's Journal" and originally printed and published at an office on the north side of Castle Street, this firm occupied premises in Broad Street from 1894 to 1970. During the 20th century amalgamation took place with the "Aberdeen Free Press" to form Aberdeen Journals Ltd. The company then printed and published its newspapers at rebuilt offices at 20 Broad Street where once lived Dr Alexander Cruden, author of a noted concordance to the bible. Robert Burns the famous Scottish poet visited the Journal offices in 1787. The Press and Journal and Evening Express moved to Lang Stacht in 1970 when this building was opened by Rt Hon Gordon Campbell MCMP Secretary of State for Scotland

Hillside, Montrose, United Kingdom where they watered a horse

Burns House. Robert Burns and his family moved to this house in 1793 from the Wee Vennel, now Bank Street. Here he continued to write songs and here he died on 21st July 1796

Burns' House. In this house the Scottish national poet, Robert Burns, died on 21st July, 1790. After his decease his wife, Jean Armour (Bonnie Jean), continued to reside here until her death in 1834. The mortal remains of the poet and his wife are interred in the kirkyard of St. Michael's situated nearby. In 1851 this house was purchased by the poet's son, Colonel William Nicol Burns EICS and placed by him under the care of trustees for its maintenance as far as possible in perpetuity as a memorial to his father.

In a house on the east side of this close Robert Burns lived during his first visit to Edinburgh, 1786.

To commemorate the visit of Robert Burns to Dumbarton on 29 June, 1787 when he was made an Honorary Burgess and Guild Brother.

Robert Burns In the year 1792, while staying in the house which occupied this site, Robert Burns wrote the poem "The Deil's Awa' Wi' Th'Exciseman" 1759-1796

Robert Burns lodged here when this building was the Black Bull Inn when he visited Glasgow June 1787, February and March 1788

Drukken Cairn was near the Drukken Steps / Saint Bryde's Well, relocated in 1976 to McKinnon Terrace, Ayrshire, KA12, Irvine, United Kingdom where they walked (1781-1782)

Here Burns wrote on a window pane Ask why God made the gem so small, and why so huge the granite, because God meant mankind should set the higher value on it.

Burns House Robert Burns lived in this house when he visited Jedburgh in 1787. He was waited on by the magistrates and presented with the Freedom of the Royal Burgh. Unveiled by the Provost J. S. Boyd 25th Jan 1913.

The Stirling Arms Hotel A marriage lintel inside the Stirling Arms Hotel shows that there has probably been an inn on this site since the 17th century. The present building dates from 1770 and was visited by Robert Burns in 1787. Burns was appointed to the post of Excise man in Dunblane, but he died before taking up office.

Stirling Road, Dunblane, United Kingdom where they was

14 Bridge Street, Inverness, United Kingdom where they stayed near (1789)

The Burns Monument, a cast iron drinking fountain, was restored and relocated to Dalkeith High Street by Midlothian Council assisted by Dalkeith Business Renewal and Dalkeith History Society. The fountain was originally erected in the High Street in 1899 to commemorate the centenary of the death of Robert Burns. The restored foutain was unveiled on the 25th January 2017

High Street, Dalkeith, United Kingdom where they was

Robert Burns 1759-1796 bicentenary 1996. In the 1870's this Inn was kept by Mrs. Moore who had been house-keeper at Laight in Glen Afton. The poet visited the Inn en-route between Mauchline and Ellisland.