George Rossi (born 28 September 1960 in Glasgow) is a Scottish actor, best known for playing Detective Constable Duncan Lennox in The Bill from 1998 to 2003. Born in Govan, Glasgow, he is of Italian descent, his parents originating from Valvori, a frazione of Vallerotonda in Lazio, Italy. Growing up, he worked in the family ice-cream van. His brother, Peter, appeared alongside him in the film Comfort and Joy. Rossi trained at East 15 Acting School in Debden, Essex.He also played Kevin in Roughnecks and has appeared in Taggart, Holby City, Boon, Local Hero, The Singing Detective and Whitechapel, "Nespresso Advert" 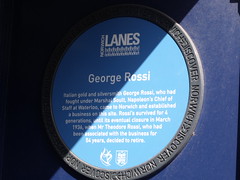 George Rossi Italian gold and silversmith George Rossi, who had fought under Marshal Soult, Napoleon's Chief of Staff at Waterloo, came to Norwich and established a business on this site. Rossi's survived for 4 generations, until its eventual closure in March 1936, when Mr Theodore Rossi, who had been associated with the business for 54 years, decided to retire.

9 Guildhall Hill, Norwich, United Kingdom where they established a business