Robert I (21 March 1274 – 7 June 1329), popularly known as Robert the Bruce, was King of Scots from 1306 to his death in 1329. One of the most renowned warriors of his generation, Robert eventually led Scotland during the First War of Scottish Independence against England. He fought successfully during his reign to regain Scotland's place as an independent kingdom and is now revered in Scotland as a national hero. Robert was a fourth great-grandson of King David I, and his grandfather, Robert de Brus, 5th Lord of Annandale, was one of the claimants to the Scottish throne during the "Great Cause". As Earl of Carrick, Robert the Bruce supported his family's claim to the Scottish throne and took part in William Wallace's revolt against Edward I of England. Appointed in 1298 as a Guardian of Scotland alongside his chief rival for the throne, John Comyn of Badenoch, and William Lamberton, Bishop of St Andrews, Robert resigned in 1300 because of his quarrels with Comyn and the apparently imminent restoration of John Balliol to the Scottish throne. After submitting to Edward I in 1302 and returning to "the king's peace", Robert inherited his family's claim to the Scottish throne upon his father's death. Bruce's involvement in John Comyn's murder in February 1306 led to his excommunication by Pope Clement V (although he received absolution from Robert Wishart, Bishop of Glasgow). Bruce moved quickly to seize the throne, and was crowned king of Scots on 25 March 1306. Edward I's forces defeated Robert in the battle of Methven, forcing him to flee into hiding, before re-emerging in 1307 to defeat an English army at Loudoun Hill and wage a highly successful guerrilla war against the English. Robert I defeated his other opponents, destroying their strongholds and devastating their lands, and in 1309 held his first parliament. A series of military victories between 1310 and 1314 won him control of much of Scotland, and at the Battle of Bannockburn in 1314, Robert defeated a much larger English army under Edward II of England, confirming the re-establishment of an independent Scottish kingdom. The battle marked a significant turning point, with Robert's armies now free to launch devastating raids throughout northern England, while he also expanded the war against England by sending armies to invade Ireland, and appealed to the Irish to rise against Edward II's rule. Despite Bannockburn and the capture of the final English stronghold at Berwick in 1318, Edward II refused to renounce his claim to the overlordship of Scotland. In 1320, the Scottish nobility submitted the Declaration of Arbroath to Pope John XXII, declaring Robert as their rightful monarch and asserting Scotland's status as an independent kingdom. In 1324, the Pope recognised Robert I as king of an independent Scotland, and in 1326, the Franco-Scottish alliance was renewed in the Treaty of Corbeil. In 1327, the English deposed Edward II in favour of his son, Edward III, and peace was concluded between Scotland and England with the Treaty of Edinburgh–Northampton in 1328, by which Edward III renounced all claims to sovereignty over Scotland. Robert I died in June 1329 and was succeeded by his son, David II. Robert's body is buried in Dunfermline Abbey, while his heart was interred in Melrose Abbey, and his internal organs embalmed and placed in St Serf's Church, Dumbarton. 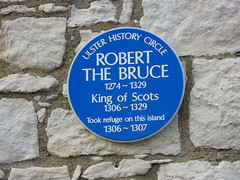 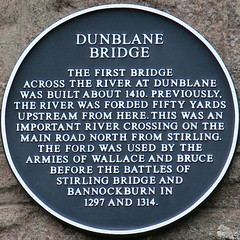 This station stands on the site of the Great Hall of Berwick Castle. Here on the 17th November 1292 the claim of Robert Bruce to the Crown of Scotland was declined and the decision in favour John Baliol was given by King Edward I before the full Parliament of England and a large gathering of the nobility and populace of both England and Scotland.

Clatteringshaws Dam, Galloway Forest Park, United Kingdom where they was (1307)

"For God and St. Andrew" Robert The Bruce King of Scots planted his standard near this spot when the Scottish patriots under his command vanquished the army of Edward II of England at the Battle of Bannockburn 24th June 1314 "We fight not for glory nor for wealth, nor honour but only and alone we fight for freedom which no good man surrenders but with his life"

in the grounds of Bannockburn Heritage Centre, FK7 0LJ, Stirling, United Kingdom where they planted his standard near this spot (1314)

Dunblane Bridge The first bridge across the river at Dunblane was built about 1410. Previously, the river was forded fifty yards upstream from here. This was an important river crossing on the main road north from Stirling. The ford was used by the armies of Wallace and Bruce before the Battles of Stirling Bridge and Bannockburn in 1297 and 1314.

Millrow, Dunblane, United Kingdom where they was

ROBERTUS DEI GRATIA REX SCOTORUM This plaque was placed here to commemorate the sepulture here within the ruined bounds of Saint Serf's Parish Church, Little Kirkton, of the embalmed viscera from the body of King Robert 'The Bruce' on or about the third week of June 1329. The dying monarch requested that his heart be taken to Jerusalem by a Knight Templar in fulfilment of a sacred vow he had made earlier in his reign to go on a crusade to the Holy Land in Palestine. On the same day and at the hour appointed for the entombment of the King in Dunfermline Abbey, a simultaneous service of sepulture was conducted within the precincts of this venerable edifice.

, Dumbarton, United Kingdom where they lay in state

Bruces Well, known to have been in existance since the 13th century serving the needs of the community attached to the Spittal and Lazarr House bearby and adjacent to the church of St. Ninian. King Robert the 1st of Scotland (the Bruce) benefitted from the water of the well and generously endowed the Lazard House. Erected by the Kyle & Carrick District Council

Maryborough Road, Prestwick, United Kingdom where they benefitted from from the waters of the well