Lieutenant General Robert Stephenson Smyth Baden-Powell, 1st Baron Baden-Powell, OM GCMG GCVO KCB KStJ DL (/ˈbeɪdən ˈpoʊəl/ BAY-dən POH-əl; 22 February 1857 – 8 January 1941), was a British Army officer, writer, founder and first Chief Scout of the world-wide Scout Movement, and founder, with his sister Agnes, of the world-wide Girl Guide / Girl Scout Movement. Baden-Powell authored the first editions of the seminal work Scouting for Boys, which was an inspiration for the Scout Movement. Educated at Charterhouse School, Baden-Powell served in the British Army from 1876 until 1910 in India and Africa. In 1899, during the Second Boer War in South Africa, Baden-Powell successfully defended the town in the Siege of Mafeking. Several of his books, written for military reconnaissance and scout training in his African years, were also read by boys. In August 1907, he held a demonstration camp, the Brownsea Island Scout camp, which is now seen as the beginning of Scouting. Based on his earlier books, particularly Aids to Scouting, he wrote Scouting for Boys, published in 1908 by Sir Arthur Pearson, for boy readership. In 1910 Baden-Powell retired from the army and formed The Scout Association. The first Scout Rally was held at The Crystal Palace in 1909. Girls in Scout uniform attended, telling Baden-Powell that they were the "Girl Scouts". In 1910, Baden-Powell and his sister Agnes Baden-Powell started the Girl Guide and Girl Scout organisation. In 1912 he married Olave St Clair Soames. He gave guidance to the Scout and Girl Guide movements until retiring in 1937. Baden-Powell lived his last years in Nyeri, Kenya, where he died and was buried in 1941. His grave is a national monument. 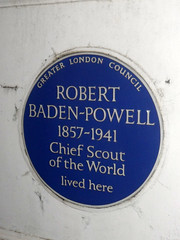 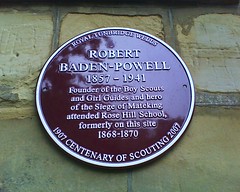 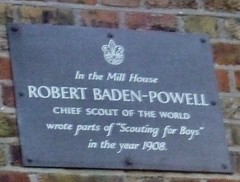 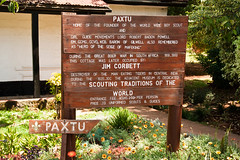 Robert Baden-Powell 1857-1941 founder of the Boy Scouts and Girl Guides and hero of the Siege of Mafeking attended Rose Hill School, formerly on this site 1868-1870

In the Mill House Robert Baden-Powell Chief Scout of the World wrote parts of "Scouting for Boys" in the year 1908.

Paxtu Home of the founder of the world wide Boy Scout and Girl Guide movements Lord Robert Baden Powell OM, GCMG, GCVO, KCB. Baron of Gilwell also remembered as "Hero of the seige of Mafeking" during the Great Boer War in South Africa 1891-1900 This cottage was later occupied by Jim Corbett destroyer of the man eating tigers in central India during the 1920-30C The adjacent museum is dedicated to the Scouting traditions of the world.

Near Outspan Hotel, Nyeri, Kenya where they lived

Robert Baden-Powell O.M. 1st Baron of Gilwell and Freeman of the Borough of Poole Founder of the Scout Movement Poole - where it all began

Behind Robert Baden-Powell statue - The Quay, Poole, United Kingdom where they founded the Scout Movement in Poole

The Medical Centre, Cavalry Road, Colchester, United Kingdom where they was stationed (1886-1887)