Joseph Mallord William Turner RA (23 April 1775 – 19 December 1851), known in his time as William Turner, was an English Romantic painter, printmaker and watercolourist. He is known for his expressive colourisations, imaginative landscapes and turbulent, often violent marine paintings. He left behind more than 550 oil paintings, 2,000 watercolours, and 30,000 works on paper. He was championed by the leading English art critic John Ruskin from 1840, and is today regarded as having elevated landscape painting to an eminence rivalling history painting. Turner was born in Maiden Lane, Covent Garden, London, to a modest lower-middle-class family. He lived in London all his life, retaining his Cockney accent and assiduously avoiding the trappings of success and fame. A child prodigy, Turner studied at the Royal Academy of Arts from 1789, enrolling when he was 14, and exhibited his first work there at 15. During this period, he also served as an architectural draftsman. He earned a steady income from commissions and sales, which due to his troubled, contrary nature, were often begrudgingly accepted. He opened his own gallery in 1804 and became professor of perspective at the academy in 1807, where he lectured until 1828. He travelled to Europe from 1802, typically returning with voluminous sketchbooks. Intensely private, eccentric and reclusive, Turner was a controversial figure throughout his career. He did not marry, but fathered two daughters, Eveline (1801–1874) and Georgiana (1811–1843), by his housekeeper Sarah Danby. He became more pessimistic and morose as he got older, especially after the death of his father, after which his outlook deteriorated, his gallery fell into disrepair and neglect, and his art intensified. In 1841, Turner rowed a boat into the Thames so he could not be counted as present at any property in that year's census. He lived in squalor and poor health from 1845, and died in London in 1851 aged 76. Turner is buried in Saint Paul's Cathedral, London. 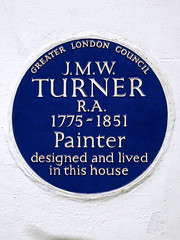 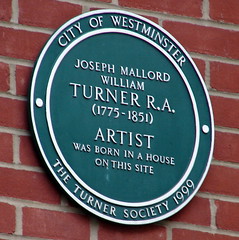 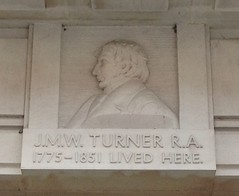 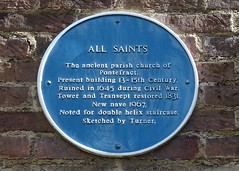 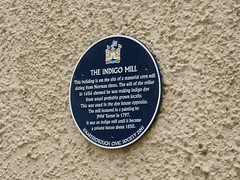 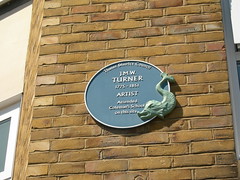 21 Maiden Lane, Westminster, London, United Kingdom where they was born (1775)

23 Queen Anne Street, W1, London, United Kingdom where they was

All Saints church, Pontefract, United Kingdom where they sketched

This building is on the site of a manorial corn mill dating from Norman times. The will of the miller in 1656 shows he was making indigo dye from woad probably grown locally. This was used in the dye house opposite. The mill featured in a painting by J. M. W. Turner in 1797. It was an indigo mill until it became a private house about 1850

?, Knaresborough, United Kingdom where they painted (1797)