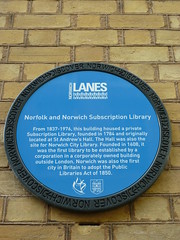 Norfolk and Norwich Subscription Library From 1837-1976, this building housed a private Subscription Library, founded in 1784 and originally located in St Andrew's Hall. The Hall was also the site for Norwich City Library. Founded in 1608, it was the first library to be established by a corporation in a corporately owned building outside London. Norwich was also the first city in Britain to adopt the Public Libraries Act of 1850.

Guildhall Hill, Norwich, United Kingdom where it was housed