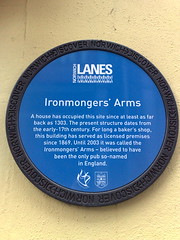 Ironmongers' Arms A house has occupied this site since at least as far back as 1303. The present structure dates from the early-17th century. For long a baker's shop, this building has served as licensed premises since 1869. Until 2003 it was called the Ironmongers' Arms - believed to have been the only pub so-named in England.