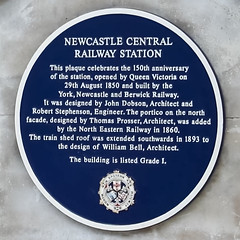 York railway station. This station was opened in 1877 by the North Eastern Railway Company to replace an earlier station built in 1841 within the City walls. Designed by architect Thomas Prosser and engineer Thomas Elliot Harrison, the station is now listed Grade II. This plaque commemorates the refurbishment schemes carried out in 2004 by Great North Eastern Railway Ltd with the support of the Railway Heritage Trust.

York Railway Station. One of the great buildings of Victorian England built 1873-7 (when it was then said to be the largest station in the world) to an original design by Thomas Prosser. It was opened on the 25th June 1877, and this plaque was erected by the York Civic Trust in 1977 to mark the centenary.