Master of Horse, Member of Parliament, and Lord Protector of the Commonwealth (1653-1658)

Oliver Cromwell (25 April 1599 – 3 September 1658) was an English general and statesman who, first as a subordinate and later as Commander-in-Chief, led armies of the Parliament of England against King Charles I during the English Civil War, subsequently ruling the British Isles as Lord Protector from 1653 until his death in 1658. He acted simultaneously as head of state and head of government of the new republican commonwealth. Cromwell was born into the landed gentry to a family descended from the sister of Henry VIII's minister Thomas Cromwell (his great-great-granduncle). Little is known of the first 40 years of his life, as only four of his personal letters survive, along with a summary of a speech that he delivered in 1628. He became an Independent Puritan after undergoing a religious conversion in the 1630s, taking a generally tolerant view towards the many Protestant sects of the time; an intensely religious man, Cromwell fervently believed in God guiding him to victory. Cromwell was elected Member of Parliament for Huntingdon in 1628, and for Cambridge in the Short (1640) and Long (1640–1649) Parliaments. He entered the English Civil Wars on the side of the "Roundheads", or Parliamentarians, and gained the nickname "Old Ironsides". Cromwell demonstrated his ability as a commander and was quickly promoted from leading a single cavalry troop to being one of the principal commanders of the New Model Army, playing an important role under General Sir Thomas Fairfax in the defeat of the Royalist ("Cavalier") forces. Cromwell was one of the signatories of Charles I's death warrant in 1649, and dominated the short-lived Commonwealth of England as a member of the Rump Parliament (1649–1653). He was selected to take command of the English campaign in Ireland in 1649–1650. Cromwell's forces defeated the Confederate and Royalist coalition in Ireland and occupied the country, ending the Irish Confederate Wars. During this period, a series of Penal Laws were passed against Roman Catholics (a significant minority in England and Scotland but the vast majority in Ireland), and a substantial amount of their land was confiscated. Cromwell also led a campaign against the Scottish army between 1650 and 1651. On 20 April 1653, he dismissed the Rump Parliament by force, setting up a short-lived nominated assembly known as Barebone's Parliament, before being invited by his fellow leaders to rule as Lord Protector of England (which included Wales at the time), Scotland, and Ireland from 16 December 1653. As a ruler, Cromwell executed an aggressive and effective foreign policy. Nevertheless, his policy of religious toleration for Protestant denominations during the Protectorate extended only to "God's peculiar", and not to those he considered heretics, such as Quakers, Socinians, and Ranters. Cromwell died of natural causes in 1658 and was buried in Westminster Abbey. He was succeeded by his son Richard, whose weakness led to a power vacuum. Oliver's former General George Monck then mounted a coup, causing Parliament to arrange Prince Charles's return to London as King Charles II and the Royalists' return to power in 1660. Cromwell's corpse was subsequently dug up, hung in chains, and beheaded. Cromwell is one of the most controversial figures in British and Irish history, considered a regicidal dictator by historians such as David Sharp, a military dictator by Winston Churchill, and a hero of liberty by John Milton, Thomas Carlyle, and Samuel Rawson Gardiner. His tolerance of Protestant sects did not extend to Catholics, and some have characterised the measures he took against them, particularly in Ireland, as genocidal or near-genocidal. His record is strongly criticised in Ireland, although the worst atrocities took place after he had returned to England. He was selected as one of the ten greatest Britons of all time in a 2002 BBC poll. 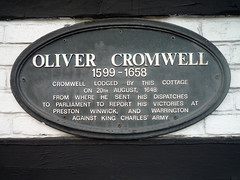 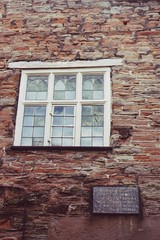 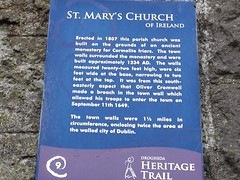 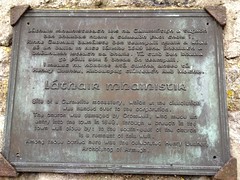 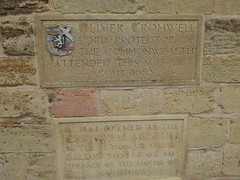 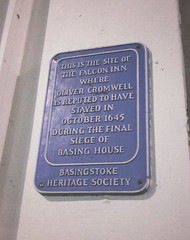 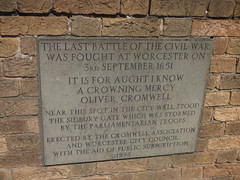 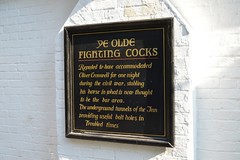 Savoy Court, London, United Kingdom where they by order of, the Confession of Faith was drawn up

Oliver Cromwell 1599-1658 Cromwell lodged by this cottage on 20th August, 1648 from where he sent his dispatches to Parliament to report his victories at Preston, Winwick, and Warrington against King Charles' army

St. Mary's Church of Ireland erected in 1807 this parish church was built on the grounds of an ancient monastery for Carmelite friars. The town wall surrounded the monastery and were built approximately 1234 AD. The wall measured twenty-two feet high, were six feet wide at the base, narrowing to two feet at the top. It was from this south easterly aspect that Oliver Cromwell made a breach in the town wall which allowed his troops to enter the town on September 11th 1649. The town walls were 1 1/2 miles in circumference, enclosing twice the area of the walled city of Dublin.

Láthair Mhainistir site of a Carmelite monastery, which in the dissolution was handed over to the corporation. The church was damaged by Cromwell, who made an entry into the town in 1649, through a breach in the town wall close by: to the south east of the church is a remnant of this wall. Among those buried here was the celebrated Henry Ussher, Archbishop of Armagh. [full inscription unknown]

?, Upton-upon-Severn, United Kingdom where they was greeted enthusiatically (1651)

Union Street, Burntisland, United Kingdom where they was

30 The Bank, Barnard Castle, United Kingdom where they stayed (1648)

Oliver Cromwell 1599-1658 MP for Cambridge, Lord Protector of the British republic. At the Black Bear Inn, which stood on this site, Cromwell met with the Eastern Association to plan the Parliamentarian war effort in this region.

Market Passage, Cambridge, United Kingdom where they was

The home of Oliver Cromwell and his family. Cromwell rose to power during the English Civil Wars, to become "Lord Protector of the Commonwealth" during England's brief period as a republic in the mid 17th century. The Cromwell family lived in Ely for some ten years from 1636 to 1646.

29 St Mary's Street, Ely, United Kingdom where they was

The last battle of the Civil War was fought at Worcester on 3rd September 1651 It is for aught I know a crowning mercy Oliver Cromwell Near this spot in the City Wall stood the Sidbury Gate, which was stormed by the Parliamentarian troops. Erected by the Cromwell Association and Worcester City Council with the aid of public subscription 1993

On the canal bridge near The Commandery - Sidbury, Worcester, United Kingdom where they won a battle (1651)

Ye Olde Fighting Cocks. Reputed to have accommodated Oliver Cromwell for one night during the civil war, stabling his horse in what was is now thought to be the bar area. The underground tunnels of the Inn providing useful bolt holes in troubled times