woman, Saint, and heroine of France

Joan of Arc (French: Jeanne d'Arc pronounced [ʒan daʁk]; c. 1412 – 30 May 1431) is a patron saint of France, honored as a defender of the French nation for her role in the siege of Orléans and her insistence on the coronation of Charles VII of France during the Hundred Years' War. Stating that she was acting under divine guidance, she became a military leader who transcended gender roles and gained recognition as a savior of France. Joan was born to a propertied peasant family at Domrémy in northeast France. In 1428, she requested to be taken to Charles, later testifying that she was guided by visions from the archangel Michael, Saint Margaret, and Saint Catherine to help him save France from English domination. Convinced of her devotion and purity, Charles sent Joan, who was about seventeen years old, to the siege of Orléans as part of a relief army. She arrived at the city in April 1429, wielding her banner and bringing hope to the demoralized French army. Nine days after her arrival, the English abandoned the siege. Joan encouraged the French to aggressively pursue the English during the Loire Campaign, which culminated in another decisive victory at Patay, opening the way for the French army to advance on Reims unopposed, where Charles was crowned as the King of France with Joan at his side. These victories boosted French morale, paving the way for their final triumph in the Hundred Years' War several decades later. After Charles's coronation, Joan participated in the unsuccessful siege of Paris in September 1429 and the failed siege of La Charité in November. Her role in these defeats reduced the court's faith in her. In early 1430, Joan organized a company of volunteers to relieve Compiègne, which had been besieged by the Burgundians—French allies of the English. She was captured by Burgundian troops on 23 May. After trying unsuccessfully to escape, she was handed to the English in November. She was put on trial by Bishop Pierre Cauchon on accusations of heresy, which included blaspheming by wearing men's clothes, acting upon visions that were demonic, and refusing to submit her words and deeds to the judgment of the church. She was declared guilty and burned at the stake on 30 May 1431, aged about nineteen. In 1456, an inquisitorial court reinvestigated Joan's trial and overturned the verdict, declaring that it was tainted by deceit and procedural errors. Joan has been revered as a martyr, and viewed as an obedient daughter of the Roman Catholic Church, an early feminist, and a symbol of freedom and independence. After the French Revolution, she became a national symbol of France. In 1920, Joan of Arc was canonized by the Roman Catholic Church and, two years later, was declared one of the patron saints of France. She is portrayed in numerous cultural works, including literature, paintings, sculptures, and music. 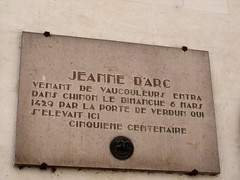 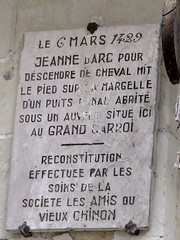 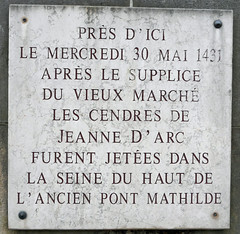 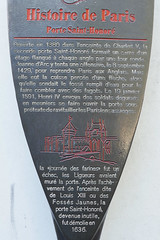 Rue Haute St-Maurice, Chinon, France where they entered the city

English translation: On the 6th of March 1429 Joan of Arc dismounted her horse with a foot on the coping of a common well shelters under an awning located here at the Grand Carroi Reconstruction performed by the care of the Society of Friends of Old Chinon

, Rouen, France where they was burned

English translation: Near by Wednesday, May 20, 1431, after the torment of the old market, the ashes of Jeanne D'arc were thrown into the Seine from the top of the old bridge Mathilde. [AWS Translate]

Pont Boieldieu, Rouen, France where they was scattered (1431)

English translation: Joan of Arc, bringing King Charles VII to Reims, stayed in the city of Chalons on 14 and 15 July 1429. Fifth Centenary 14 July 1929

, Châlons-en-Champagne, France where they stayed (1429)

English translation: Joan of Arc brought Charles VII to his coronation in Reims on 17 July 1429 fulfilling his mission. Fifth centenary.

English translation: Joan of Arc leading Charles VII to Reims was received 10 July 1429 in this church by the Troyens who spontaneously returned to their legitimate king. Fifth Centenary 7 July 1929

English translation: Porte Saint-Honoré. Opened in 1380 at Charles V, the second Saint-Honoré gate formed a one-storey square flanked at each corner by a round tower. Jeanne d'Arc attempted an offensive there on 8 Sept. 1429 to take Paris back to the English. But she had the thigh pierced by an arrow, as she probed the ditch filled with water to make it fill with fagots. On 19 Jan. 1591 Henri IV sent soldiers disguised as millers to be opened on the pretext of supplying the besieged Parisians: the “day of flour” was a failure, the Ligueurs had sealed the door. After the completion of the enclosure known as Louis XIII or the Yellow Fossés, the Saint-Honoré gate, which became useless, was demolished in 1636. [AWS Translate]

English translation: Here was the tower of the castle of Philippe Auguste called later Tower of the Pucelle, Jeanne d'Arc was imprisoned there from 25 December 1430 to 30 May 1431 day of her torment. [AWS Translate]

English translation: In this archiepiscopal palace on Tuesday 29 ai 1421 was held the proceedings of the trial of Jeanne d'Arc where she was summoned to appear next day at the old march [AWS Translate]

English translation: 1429 - 1929 Joan of Arc made a vigil of arms in this church on September 7, 1929, before taking the assault of Paris. Wounded under its walls, she was brought back to the chapel of Saint Denis. Fifth centenary

English translation: 1430-1930 Joan of Arc desiring to return Paris to France comes to Lagny at the end of March 1430 “so that those of the square will fight good war against the Anglans” left in May for Compiègne the valiant city his first step towards the Bucher of Rouen. Fifth centenary [AWS Translate]

English translation: 1429-1929 Joan of Arc coming from Reims and going to Paris passed to Montmirail on the first August 1429. Fifth centenary [AWS Translate]

English translation: 1429 - 1929 Joan of Arc returning from Senlis to the Loire came on 16 September 1429 to the Gate of Sens. The English guard refused passage, she crossed the Yonne river a little below the city.

Boulevard Maupéou, Sens, France where they was (1429)

English translation: Here are the remains of two towers that flanked the entrance to Fort des Tourelles May 7, 1429 on this shore Jeanne d'Arc attacked this fort occupied by the English butted them off and returned in the evening to Orléans by the bridge The next day, May 8 the English lifted the siege of Orléans [AWS Translate]

English translation: In this house, rebuilt in 1965, Joan of Arc was the host of Jacques Boucher, treasurer of the Duke of Orléans, from 29 April to 9 May 1429

English translation: 1430-1930 Joan of Arc Captive was locked in Arras from the end of September to November 1430. Fifth centenary.

English translation: Joan of Arc coming to the rescue of Compiègne on 23 May 1430, pitched battle there on the same day. She falls into the hands of enemies under the walls of the city, which she never ceased to cherish. “Since God will help those of Compiègne, I want to be there”. Fifth centenary.