Flavius Valerius Constantius "Chlorus" (c. 250 – 25 July 306), also called Constantius I, was a Roman emperor as one of the four original members of the Tetrarchy established by Diocletian in 293. He was a junior-ranking emperor (caesar) from 293 to 305, and senior emperor (Augustus) from 305 to 306. Constantius was also father of Constantine the Great, the first Christian emperor of Rome. The nickname Chlorus (Greek: Χλωρός, lit. "the Green") was first popularized by Byzantine-era historians and not used during the emperor's lifetime. Of humble origin, Constantius had a distinguished military career and rose to the top ranks of the army. Around 289 he set aside Helena, Constantine's mother, to marry a daughter of Emperor Maximian, and in 293 was added to the imperial college by Maximian's colleague, Diocletian. Assigned to rule Gaul, Constantius defeated the usurper Carausius there and his successor Allectus in Britain, and campaigned extensively along the Rhine frontier, defeating the Alamanni and Franks. When the Diocletianic Persecution was announced in 303, Constantius ordered the demolition of churches but did not actively hunt down Christians in his domain. Upon becoming senior emperor in May 305, Constantius launched a successful punitive campaign against the Picts beyond the Antonine Wall. He died suddenly at Eboracum (York) in July the following year. After Constantius's death, the army, perhaps at his own instigation, immediately acclaimed his son Constantine as emperor. This act contributed to the collapse of the Diocletianic tetrarchy, sparking a series of civil wars which only ended when Constantine finally united the whole Roman Empire under his rule in 324. According to the Oxford Classical Dictionary, "Constantinian propaganda bedevils assessment of Constantius, yet he appears to have been an able general and a generous ruler". His descendants, the Constantinian dynasty, ruled the Empire until the death of his grandson Julian the Apostate in 363. 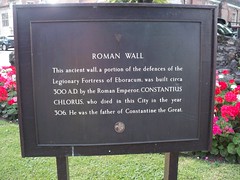 Roman Wall. This ancient wall, a portion of the defences of the Legionary Fortress of Eboracum, was built circa 300 A. D. by the Roman Emperor, Constantius Chlorus, who died in this City in the year 306. He was the father of Constantine the Great.