Henry III (1 October 1207 – 16 November 1272), also known as Henry of Winchester, was King of England, Lord of Ireland, and Duke of Aquitaine from 1216 until his death in 1272. The son of King John and Isabella of Angoulême, Henry assumed the throne when he was only nine in the middle of the First Barons' War. Cardinal Guala declared the war against the rebel barons to be a religious crusade and Henry's forces, led by William Marshal, defeated the rebels at the battles of Lincoln and Sandwich in 1217. Henry promised to abide by the Great Charter of 1225, a later version of the 1215 Magna Carta, which limited royal power and protected the rights of the major barons. His early rule was dominated first by Hubert de Burgh and then Peter des Roches, who re-established royal authority after the war. In 1230, the King attempted to reconquer the provinces of France that had once belonged to his father, but the invasion was a debacle. A revolt led by William Marshal's son, Richard Marshal, broke out in 1232, ending in a peace settlement negotiated by the Church. Following the revolt, Henry ruled England personally, rather than governing through senior ministers. He travelled less than previous monarchs, investing heavily in a handful of his favourite palaces and castles. He married Eleanor of Provence, with whom he had five children. Henry was known for his piety, holding lavish religious ceremonies and giving generously to charities; the King was particularly devoted to the figure of Edward the Confessor, whom he adopted as his patron saint. He extracted huge sums of money from the Jews in England, ultimately crippling their ability to do business, and as attitudes towards the Jews hardened, he introduced the Statute of Jewry, attempting to segregate the community. In a fresh attempt to reclaim his family's lands in France, he invaded Poitou in 1242, leading to the disastrous Battle of Taillebourg. After this, Henry relied on diplomacy, cultivating an alliance with Frederick II, Holy Roman Emperor. Henry supported his brother Richard of Cornwall in his bid to become King of the Romans in 1256, but was unable to place his own son Edmund Crouchback on the throne of Sicily, despite investing large amounts of money. He planned to go on crusade to the Levant, but was prevented from doing so by rebellions in Gascony. By 1258, Henry's rule was increasingly unpopular, the result of the failure of his expensive foreign policies and the notoriety of his Poitevin half-brothers, the Lusignans, as well as the role of his local officials in collecting taxes and debts. A coalition of his barons, initially probably backed by Eleanor, seized power in a coup d'état and expelled the Poitevins from England, reforming the royal government through a process called the Provisions of Oxford. Henry and the baronial government enacted a peace with France in 1259, under which Henry gave up his rights to his other lands in France in return for King Louis IX recognising him as the rightful ruler of Gascony. The baronial regime collapsed but Henry was unable to reform a stable government and instability across England continued. In 1263, one of the more radical barons, Simon de Montfort, seized power, resulting in the Second Barons' War. Henry persuaded Louis to support his cause and mobilised an army. The Battle of Lewes occurred in 1264, where Henry was defeated and taken prisoner. Henry's eldest son, Edward, escaped from captivity to defeat de Montfort at the Battle of Evesham the following year and freed his father. Henry initially enacted a harsh revenge on the remaining rebels, but was persuaded by the Church to mollify his policies through the Dictum of Kenilworth. Reconstruction was slow and Henry had to acquiesce to various measures, including further suppression of the Jews, to maintain baronial and popular support. Henry died in 1272, leaving Edward as his successor. He was buried in Westminster Abbey, which he had rebuilt in the second half of his reign, and was moved to his current tomb in 1290. Some miracles were declared after his death; however, he was not canonised. Henry's reign of fifty-six years was the longest in medieval English history and would not be surpassed by an English, or later British, monarch until that of George III in the nineteenth century. 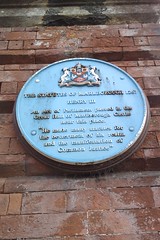 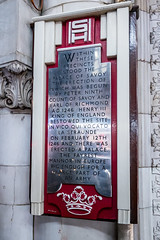 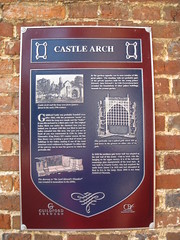 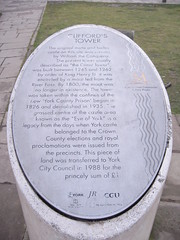 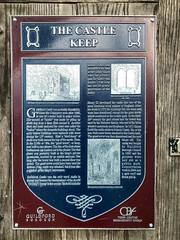 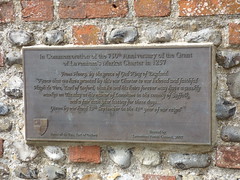 The Statutes of Marlborough 1267, Henry III. An Act of Parliament passed in the Great Hall of Marlborough Castle near this place. "He made many statutes for the betterment of his realm and the manifestation of Common Justice"

Within these precincts stood the Palace of Savoy, the erection of which was begun by Peter, ninth Count of Savoy and Earl of Richmond, A.D 1246. Henry III King of England bestowed the site "in vico qui vocato la straunde" on February 12th 1246 and there was erected a palace, "the fayrest mannor in Europe" big enough for a large part of an army

Guildford Palace The ruins you can see nearby are the remains of what was once one of the most luxurious royal residences in England. Guildford Castle was probably founded by William the Conqueror soon after 1066, with its prominent "motte" or mound with "bailey" to one side, enclosed by a ditch and a wall. The original bailey ditch seems to have run near the spot where you are now standing, until it was filled in when the bailey was extended to Quarry Street in about 1200. Here in the bailey there would originally have been timber buildings to house the garrison. These would have been replaced with stone during the 12th century and subsequently Henry III lavished a great deal of money on buildings and decorations here. The ruin to your right may well have been the King's Great Chamber, his private quarters when staying at Guildford. We know from Exchequer records that the chamber was panelled with wood, there was glass in the windows and the ceiling was decorated with moons and stars. The king had his own chapel nearby, as did the queen. Henry's wife, Eleanor of Provence, was a highly cultured woman who introduced colonnaded gardens and tiled pavements at Guildford. The life of the castle revolved around the Great Hall, which probably lay where the Victorian brick houses now stand. Nearby buildings would have accommodated the royal children, the officials, courtiers and servants who attended the royal family. After Henry III's death in 1272 the palace buildings were used less frequently and eventually allowed to fall into decay.

Castle Hill, Guildford, United Kingdom where they lavished a great deal of money on buildings and decorations here

Castle Arch Guildford Castle was probably founded soon after 1066, with the prominent "motte" on which the keep now stands and the "bailey" to one side enclosed by a ditch and a wall. The original bailey ditch extended into this area. The gate you see in front of you was constructed in 1256 by John of Gloucester, King Henry III's master mason. At this time Henry was lavishing a great deal of money on buildings in the bailey, making it one of the most luxurious royal residences in England. On either side of the gateway can be seen the grooved in which the portcullis slid. In the gardens opposite can be seen remains of this great palace. The standing walls are probably part of the private quarters built for the young prince Edward - later Edward I - in 1246. Excavations have revealed the foundations of other palace buildings beneath the present garden. In 1630 the northern gate tower was adapted as the end wall of this house. Clad in bricks with tile-hanging on the upper storeys, it is of the hall-and-crosswings plan characteristic of the local style. It was built by Francis Carter, who had acquired the castle from James I in 1610 and had attempted at first to live in the keep. Since 1898 it has been Guildford Museum.

Castle Hill, Guildford, United Kingdom where they lavished a great deal of money on buildings in the bailey, making it one of the most luxurious royal residences in England (1256)

Tower Street, York, United Kingdom where they ordered the building of the Great Tower (1245-1262)

In Commemoration of the 750th anniversary of the Grant of Lavenham's Market Charter in 1257 From Henry, by the grace of God King of England: "Know that we have granted by this our Charter to our beloved and faithful Hugh de Vere, Earl of Oxford, that he and his heirs forever may have a weekly market on Tuesday at his manor of Laneham in the county of Suffolk, and a fair each year lasting for three days ... Given by our hand 15th September in the 41st year of our reign" Arms of de Vere, Earl of Oxford Erected by Lavenham Parish Council, 2007

Market Place, Lavenham, United Kingdom where they granted a charter (1257)