Eleanor of Castile (1241 – 28 November 1290) was Queen of England as the first wife of Edward I, whom she married as part of a political deal to affirm English sovereignty over Gascony. The marriage was known to be particularly close, and Eleanor travelled extensively with her husband. She was with him on the Ninth Crusade, when he was wounded at Acre, but the popular story of her saving his life by sucking out the poison has long been discredited. When she died, at Harby near Lincoln, her grieving husband famously ordered a stone cross to be erected at each stopping-place on the journey to London, ending at Charing Cross. Eleanor was better educated than most medieval queens and exerted a strong cultural influence on the nation. She was a keen patron of literature, and encouraged the use of tapestries, carpets and tableware in the Spanish style, as well as innovative garden designs. She was also a successful businesswoman, endowed with her own fortune as Countess of Ponthieu. 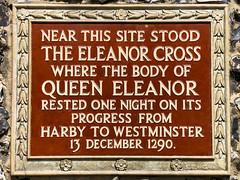 London Rd/Market Place, St Albans, United Kingdom where they rested in a coffin (1290)

Site of King Arthur's Tomb. In the year 1191 the bodies of King Arthur and his Queen were said to have been found on the south side of the lady chapel. On the 19th April 1278 their remains were removed in the presence of King Edward I and Queen Eleanor to a black marble tomb on this site. This tomb survived until the dissolution of the abbey in 1539

Glastonbury Abbey, Glastonbury, United Kingdom where they was (1278)