Edward II (25 April 1284 – 21 September 1327), also called Edward of Caernarfon, was King of England and Lord of Ireland from 1307 until he was deposed in January 1327. The fourth son of Edward I, Edward became the heir apparent to the throne following the death of his elder brother Alphonso. Beginning in 1300, Edward accompanied his father on campaigns to pacify Scotland. In 1306, he was knighted in a grand ceremony at Westminster Abbey. Following his father's death, Edward succeeded to the throne in 1307. He married Isabella, the daughter of the powerful King Philip IV of France, in 1308, as part of a long-running effort to resolve tensions between the English and French crowns. Edward had a close and controversial relationship with Piers Gaveston, who had joined his household in 1300. The precise nature of their relationship is uncertain; they may have been friends, lovers, or sworn brothers. Edward's relationship with Gaveston inspired Christopher Marlowe's 1592 play Edward II, along with other plays, films, novels and media. Gaveston's power as Edward's favourite provoked discontent among both the French royal family and the barons, and Edward was forced to exile him. On Gaveston's return, the barons pressured the king into agreeing to wide-ranging reforms, called the Ordinances of 1311. The newly empowered barons banished Gaveston, to which Edward responded by revoking the reforms and recalling his favourite. Led by Edward's cousin Thomas, 2nd Earl of Lancaster, a group of the barons seized and executed Gaveston in 1312, beginning several years of armed confrontation. English forces were pushed back in Scotland, where Edward was decisively defeated by Robert the Bruce at the Battle of Bannockburn in 1314. Widespread famine followed, and criticism of the king's reign mounted. The Despenser family, in particular Hugh Despenser the Younger, became close friends and advisers to Edward, but Lancaster and many of the barons seized the Despensers' lands in 1321, and forced the king to exile them. In response, Edward led a short military campaign, capturing and executing Lancaster. Edward and the Despensers strengthened their grip on power, formally revoking the 1311 reforms, executing their enemies and confiscating estates. Unable to make progress in Scotland, Edward finally signed a truce with Bruce. Opposition to the regime grew, and when Isabella was sent to France to negotiate a peace treaty in 1325, she turned against Edward and refused to return. Instead, she allied herself with the exiled Roger Mortimer, and invaded England with a small army in 1326. Edward's regime collapsed and he fled to Wales, where he was captured in November. The king was forced to relinquish his crown in January 1327 in favour of his 14-year-old son, Edward III, and he died in Berkeley Castle on 21 September, probably murdered on the orders of the new regime. Edward's contemporaries criticised his performance as king, noting his failures in Scotland and the oppressive regime of his later years, although 19th-century academics later argued that the growth of parliamentary institutions during his reign was a positive development for England over the longer term. 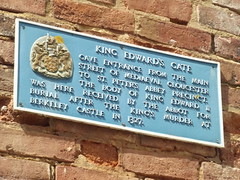 The Collegiate and Parish Church of St. John the Baptist This church was founded in 1344 by Queen Isabella widow of King Edward II, on land called 'Babblake' and was granted by her to the Guild of St. John the Baptist. It was to be served by two chaplains from the 'College of Bablake'. Those priests were to say a daily mass for, the repose of the soul of her late husband King Edward II, her son King Edward III, her daughter in law Queen Phiippa, her grandson Edward the Black Prince and members of the Guild of St. John. The building was consecrated on 2nd May 1350 to God and St. John the Baptist. By the time of the dissolution of the Guilds in 1548, the church was closed and given to the Mayor of the Corporation. During the time of the Commonwealth (1642-1660), the church was used as a prison for Royalist soldiers captured at the Battle of Preston. As the sympathies of the citizens of Coventry lay with the Parliamentarians, they gave the Royalist prisoners a hostile reception giving rise to the saying 'sent to Coventry', meaning that someone is ignored or treated coldly. After many years lying empty, occasionally being used to hold markets and as a stretch yard for dyed cloth, the Corporation agreed to reopen the church as a place of worship. It was created a Parish Church on 24th July 1734. Today the church serves the spiritual and other needs of this community and the city.

"For God and St. Andrew" Robert The Bruce King of Scots planted his standard near this spot when the Scottish patriots under his command vanquished the army of Edward II of England at the Battle of Bannockburn 24th June 1314 "We fight not for glory nor for wealth, nor honour but only and alone we fight for freedom which no good man surrenders but with his life"

in the grounds of Bannockburn Heritage Centre, FK7 0LJ, Stirling, United Kingdom where they was vanquished (1314)

King Edward's Gate Gave entrance from the main street of mediaeval Gloucester to St. Peter's Abbey precinct. The body of King Edward II was here received by the Abbot for burial after the King's murder at Berkeley Castle in 1327.