Clementine Ogilvy Spencer-Churchill, Baroness Spencer-Churchill, (née Hozier; 1 April 1885 – 12 December 1977) was the wife of Winston Churchill, Prime Minister of the United Kingdom, and a life peer in her own right. While legally the daughter of Sir Henry Hozier, her mother’s known infidelity and his suspected infertility made her paternal parentage uncertain. She met Winston Churchill in 1904 and they began their marriage of 56 years in 1908. They had five children together, one of whom died at the age of two. During World War I, Clementine organised canteens for the munitions workers and during World War II, she acted as Chairperson of the Red Cross Aid to Russia Fund, President of the Young Women’s Christian Association War Time Appeal and Chairman of Maternity Hospital for the Wives of Officers, Fulmer Chase. Throughout her life she granted many titles, the final being a life peerage following the death of her husband in 1965. In her later years, she sold several of her husband’s portraits to help support herself financially. She died in her London home at the age of 92. 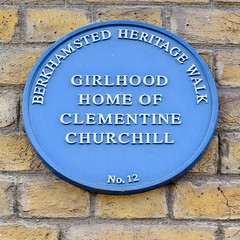 235 High Street, Berkhamsted, United Kingdom where they grew up

This building was the home of the late Baroness Spencer-Churchill GBE wife of Sir Winston Churchill, when as Miss Clementine Hozier she attended Berkhamsted School for girls from 1900-03