Sir Winston Leonard Spencer Churchill, KG, OM, CH, TD, DL, FRS, RA (30 November 1874 – 24 January 1965) was a British statesman who served as Prime Minister of the United Kingdom from 1940 to 1945, during the Second World War, and again from 1951 to 1955. Although best known for his wartime leadership as Prime Minister, Churchill was also a Sandhurst-educated soldier, a Nobel Prize-winning writer and historian, a prolific painter, and one of the longest-serving politicians in British history. Apart from two years between 1922 and 1924, he was a Member of Parliament (MP) from 1900 to 1964 and represented a total of five constituencies. Ideologically an economic liberal and imperialist, he was for most of his career a member of the Conservative Party, which he led from 1940 to 1955, though he was also a member of the Liberal Party from 1904 to 1924. Of mixed English and American parentage, Churchill was born in Oxfordshire to a wealthy, aristocratic family. He joined the British Army in 1895 and saw action in British India, the Anglo-Sudan War, and the Second Boer War, gaining fame as a war correspondent and writing books about his campaigns. Elected a Conservative MP in 1900, he defected to the Liberals in 1904. In H. H. Asquith's Liberal government, Churchill served as President of the Board of Trade and Home Secretary, championing prison reform and workers' social security. As First Lord of the Admiralty during the First World War, he oversaw the Gallipoli Campaign but, after it proved a disaster, he was demoted to Chancellor of the Duchy of Lancaster. He resigned in November 1915 and joined the Royal Scots Fusiliers on the Western Front for six months. In 1917, he returned to government under David Lloyd George and served successively as Minister of Munitions, Secretary of State for War, Secretary of State for Air, and Secretary of State for the Colonies, overseeing the Anglo-Irish Treaty and British foreign policy in the Middle East. After two years out of Parliament, he served as Chancellor of the Exchequer in Stanley Baldwin's Conservative government, returning the pound sterling in 1925 to the gold standard at its pre-war parity, a move widely seen as creating deflationary pressure and depressing the UK economy. Out of government during his so-called "wilderness years" in the 1930s, Churchill took the lead in calling for British rearmament to counter the growing threat of militarism in Nazi Germany. At the outbreak of the Second World War he was re-appointed First Lord of the Admiralty. In May 1940, he became Prime Minister, replacing Neville Chamberlain. Churchill oversaw British involvement in the Allied war effort against the Axis powers, resulting in victory in 1945. After the Conservatives' defeat in the 1945 general election, he became Leader of the Opposition. Amid the developing Cold War with the Soviet Union, he publicly warned of an "iron curtain" of Soviet influence in Europe and promoted European unity. He lost the 1950 election, but was returned to office the following year in the 1951 election. His second term was preoccupied with foreign affairs, especially Anglo-American relations and the preservation of the British Empire. Domestically, his government emphasised house-building and developed a nuclear weapon. In declining health, Churchill resigned as Prime Minister in 1955, although he remained an MP until 1964. Upon his death in 1965, he received a state funeral. Widely considered one of the 20th century's most significant figures, Churchill remains popular in the UK and Western world, where he is seen as a victorious wartime leader who played an important role in defending Europe's liberal democracy against the spread of fascism. He is also praised as a social reformer. However, he has been criticised for some wartime events – notably the 1945 bombing of Dresden – and also for his imperialist views, including comments on race. 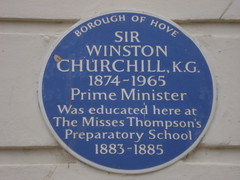 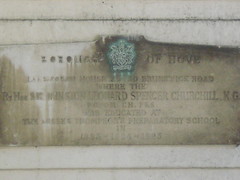 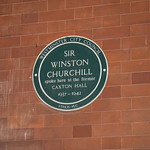 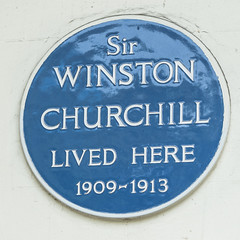 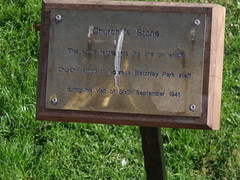 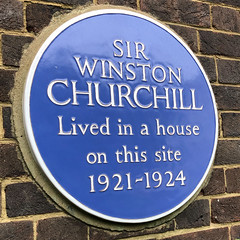 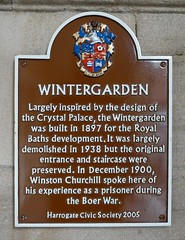 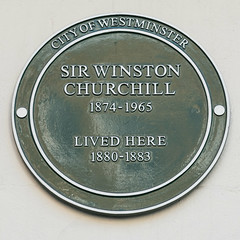 3 Sussex Square, W2, London, United Kingdom where they was

Wintergarden. Largely inspired by the design of the Crystal Palace, the Wintergarden was built in 1897 for the Royal Baths development. It was largely demolished in 1938 but the original entrance and staircase were preserved. In December 1900, Winston Churchill spoke here of his experience as a prisoner during the Boer War.

Droxford Station. In a special train at this station, the Rt.Hon. Sir Winston Churchill MP then Prime Minister of the UK spent some days with his staff prior to the invasion of Europe on D Day 6th June 1944

Winston S Churchill Epping Mp (1924-1945) and war time Prime Minister. On this site stood the Victoria Buildings from which Mr Churchill addressed the people of Epping as their MP

Town Hall, Oldham, United Kingdom where they was

Westminster Hall, London, United Kingdom where they lay in state (1965)

Sir Winston Churchill Prime Minister 1940-1945 and 1951-1955 Member of parliament for the city of DUndee from 9th May 1908 to 15th November 1922 This plaque was erected to commemorate the centenary of his election 9th May 2008 REMEMBER WINSTON CHURCHILL Unveiled by Winston Churchill's daughter The Lady Soames, L.G., D.B.E.

118 Nethergate, Dundee, United Kingdom where they was near

St George's Hall. Bradford's first public building was designed by celebrated architects Henry Francis Lockwood and William Mawson, and financed by public subscription. It has hosted, amongst others, Charles Dickens, Winston Churchill and Harry Houdini, and is one of the oldest concert halls still in use in Europe. Erected 1853