Alfred the Great (848/849 – 26 October 899) was king of the West Saxons from 871 to c. 886 and king of the Anglo-Saxons from c. 886 to 899. He was the youngest son of King Æthelwulf, who died when Alfred was young. Three of Alfred's brothers, Æthelbald, Æthelberht and Æthelred, reigned in turn before him. Under Alfred's rule, considerable administrative and military reforms were introduced, prompting lasting change in England. After ascending the throne, Alfred spent several years fighting Viking invasions. He won a decisive victory in the Battle of Edington in 878 and made an agreement with the Vikings, creating what was known as the Danelaw in the North of England. Alfred also oversaw the conversion of Viking leader Guthrum to Christianity. He defended his kingdom against the Viking attempt at conquest, becoming the dominant ruler in England. Details of his life are described in a work by 9th-century Welsh scholar and bishop Asser. Alfred had a reputation as a learned and merciful man of a gracious and level-headed nature who encouraged education, proposing that primary education be conducted in Old English rather than Latin and improving the legal system and military structure and his people's quality of life. He was given the epithet "the Great" in the 16th century. 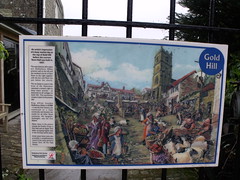 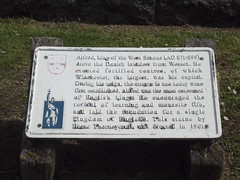 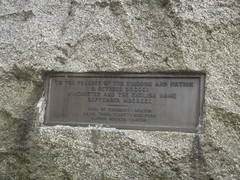 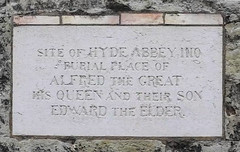 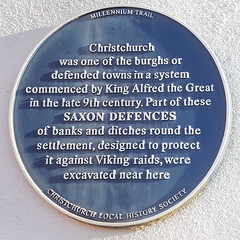 Gold Hill An artist's impression of a busy market day at the top of Gold Hill before the current Town Hall was built in 1827. The main features still in place are Shaftesbury Abbey precinct wall on the right together with the Sun and Moon Inn just below the church. The six sheep in a pen in the front of the illustration represent a tenant's right to keep these animal's - as bestowed on all cottages on Gold Hill. This permission remains in place to the present day! King Alfred founded Shaftesbury Abbey in AD888 - it was the first nunnery not connected to a male community and became the model for all other Royal nunneries. His daughter Aethelgifu, was the first Abbess. Other items in the picture include the Poultry Cross, a Fish Stall and an Apple Tree Seller occupying regular sites in this thriving market place. Artist: Janet Swiss (who also provided a complementary mural of the same period in Swans Yard, off the High Street).

Gold Hill, Shaftesbury, United Kingdom where they was

Alfred, king of the West Saxons (AD 871-899) drove the Danish invaders from Wessex. He created fortified centres, of which Winchester, the largest, was his capital. During his reign, the streets in use today were first established. Alfred was the most esteemed of English kings. He encouraged the revival of learning and monastic life, and laid the foundation for a single kingdom of England. this statue by Hamo Thorneycroft was erected in 1901.

near the statue of Alfred the Great, The Broadway, Winchester, United Kingdom where they is commemorated (1901)

To the founder of the Kingdom and Nation D. October DCCCCI. Winchester and the English name September MDCCCCI.

Below statue of Alfred the Great, Winchester, United Kingdom where they is commemorated (1901)

The Alfred Plaque. This plaque was erected in 1986 to mark the eleven hundredth anniversary of King Alfred's resettlement of the Roman city of London in 886, after the abandonment of the Saxon town which had existed for some three centuries in the Strand area to the west of the City. At this place a harbour and market were established by 899 to restore trade after the Viking invasions

Site of Hyde Abbey 1110 burial place of Alfred The Great, his queen and their son Edward The Elder

Hyde Gate, Winchester, United Kingdom where they was buried (899)

Christchurch was one of the burghs or defended towns in a system commenced by King Alfred the Great in the late 9th century. Part of these SAXON DEFENCES of banks and ditches round the settlement, designed to protect it against Viking raids, were excavated near here

Wick Lane, Christchurch, United Kingdom where they was