woman and Lady of the Mercians 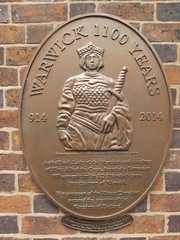 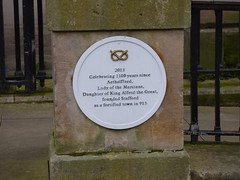 Warwick 1100 Years 914 2014 Aethelflaed, Lady of the Mercians and daughter of King Alfred the Great, founded a fortress at 'Waeringwicum' in AD 914 which grew into the town of Warwick. Her conquest of the Viking 'Danelaw' secured the creation of the Kingdom of England

Castle Street, Warwick, United Kingdom where they founded a fortress at 'Waeringwicum' (914)

Castlerock Shipyard. Named after the 'castle' built by Saxon Princess Ethelfleda, King Alfred the Great's daughter in 915 A.D., which was near the first support of the railway bridge, close to this spot. Shipbuilding here since 1810, with facilities owned by, amongst others, John Anderton & Co., Anderton & LeCouteur, Speakman & Sons, and perhaps most famously, Richard Abel & Sons. Two of Abel's boats still exist today - Oakdale (built 1951) and Mossdale (built in Northwich c.1860, and bought and rebuilt by Abel's). These boats are the last remaining 'Mersey Flats'. The last boat built at the yard was Ruth Bate in 1953. The site closed because of the building of the Jubilee Bridge and changes to Abel's business, which closed in 1964.

Celebrating 1100 years since Aethelflaed, Lady of the Mercians, Daughter of King Alfred the Great, founded Stafford as a fortified town in 913