Catherine Howard (c. 1521–25 – 13 February 1542), also spelled Katheryn Howard, was Queen of England from 1540 until 1542 as the fifth wife of Henry VIII. She was the daughter of Lord Edmund Howard and Joyce Culpeper, a cousin to Anne Boleyn (the second wife of Henry VIII), and the niece of Thomas Howard, 3rd Duke of Norfolk. Thomas Howard was a prominent politician at Henry's court, and he secured her a place in the household of Henry's fourth wife, Anne of Cleves, where she caught the King's interest. She married him on 28 July 1540 at Oatlands Palace in Surrey, just 19 days after the annulment of his marriage to Anne. He was 49, and she was between 15 and 19 years old. Catherine was stripped of her title as queen in November 1541 and was unable to use the title in a public capacity, but she was still married to the king until she was beheaded three months later on the grounds of treason for committing adultery with her distant cousin Thomas Culpeper. 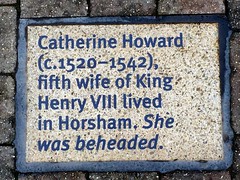 West Street, Horsham, United Kingdom where they was