Catherine Parr (sometimes alternatively spelled Katherine, Katheryn, Kateryn or Katharine; c. August 1512 – 5 September 1548) was Queen of England and Ireland as the last of the six wives of King Henry VIII from their marriage on 12 July 1543 until Henry's death on 28 January 1547. Catherine was the final queen consort of the House of Tudor, and outlived Henry by a year and eight months. With four husbands, she is the most-married English queen. She was the first woman to publish an original work under her own name in English in England. Catherine enjoyed a close relationship with Henry's three children, Mary, Elizabeth, and Edward. She was personally involved in the education of Elizabeth and Edward. She was influential in Henry's passing of the Third Succession Act in 1543 that restored his daughters Mary and Elizabeth to the line of succession to the throne. Catherine was appointed regent from July to September 1544 while Henry was on a military campaign in France and in case he lost his life, she was to rule as regent until Edward came of age. However, he did not give her any function in government in his will. She assumed the role of her stepdaughter Elizabeth's guardian following the King's death. On 25 April 1544, she published her first book, Psalms or Prayers, anonymously. Her book Prayers or Meditations became the first book published by an English queen under her own name on 2 June 1545. She published a third book, The Lamentation of a Sinner, on 5 November 1547. On account of Catherine's Protestant sympathies, she provoked the enmity of anti-Protestant officials, who sought to turn the King against her; a warrant for her arrest was drawn up, probably in the spring of 1546. However, she and the King soon reconciled. After King Henry's death in 1547, Catherine was allowed to keep the queen's jewels and dresses as queen dowager. About six months after Henry's death, she married her fourth and final husband, Thomas Seymour, 1st Baron Seymour of Sudeley. The marriage was short-lived, as she died on Wednesday, 5 September 1548 due to complications of childbirth. Parr's funeral was held on 7 September 1548. Parr's funeral was the first Protestant funeral in England, Scotland or Ireland to be held in English. 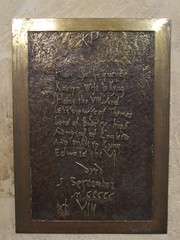 Church of St Mary, Sudeley Castle, Sudeley, United Kingdom where they was buried (1548)