Henry Stuart, Lord Darnley (7 December 1545 – 10 February 1567) was the second husband of Mary, Queen of Scots. From his marriage in 1565, he was king consort of Scotland. He was created Duke of Albany shortly before his marriage. Less than a year after the birth of his and Mary's only child, King James VI of Scotland and I of England, Darnley was murdered at Kirk o' Field in 1567. Many contemporary narratives describing his life and death refer to him as Lord Darnley, his title as heir apparent to the Earldom of Lennox, and it is by this appellation that he is known in history. On his mother's side he was a great-grandson of King Henry VII of England. 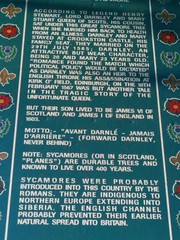