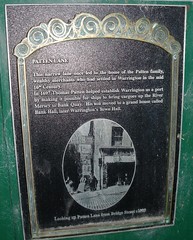 Patten Lane This narrow lane once led to the home of the Patten family, wealthy merchants who had settled in Warrington in the mid 16th Century. In 1697 Thomas Patten helped establish Warrington as a port by making it possible for ships to bring cargoes up the River Mersey to Bank Quay. His son moved to a grand house called Bank Hall, later Warrington's Town Hall.

Patten Lane, Warrington, United Kingdom where they lived near