woman, pioneer of women's suffrage, president of the National Union of Women's Suffrage Societies, and Dame Grand Cross of the Most Excellent Order of the British Empire (from 1925)

Dame Millicent Garrett Fawcett GBE (11 June 1847 – 5 August 1929) was an English politician, writer and feminist. She campaigned for women's suffrage through legal change and from 1897 to 1919 led Britain's largest women's rights association, the National Union of Women's Suffrage Societies (NUWSS). She explained, "I cannot say I became a suffragist. I always was one, from the time I was old enough to think at all about the principles of Representative Government." Fawcett tried to broaden women's chances of higher education, serving as a governor of Bedford College, London (now Royal Holloway) and co-founding Newnham College, Cambridge in 1875. In 2018, 100 years after the Representation of the People Act, she became the first woman honoured by a statue in Parliament Square. 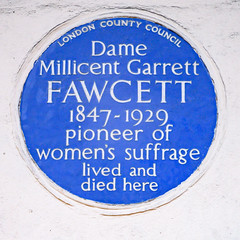 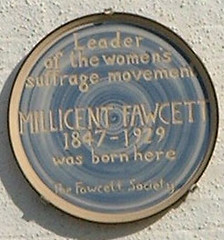 1833-1884 Henry Fawcett Born in Salisbury in 1833. Blinded in a shooting accident, he became Professor of Political Economy at Cambridge University and a Liberal MP. He campaigned for equal rights for women and married Millicent Garrett. Appointed Postmaster General in 1880 he reformed the Post Office by introducing the sixpenny telegram, tablets on letterboxes to show collection times; a savings scheme and postal orders. He introduced the Parcel Post service in 1883. Millicent became the president of the National Union of Women's Suffrage Societies and played a key role in persuading Parliament to give women the vote. Henry Fawcett died in 1884.

The Uplands, Victoria Street, Aldeburgh, United Kingdom where they was born (1847)

18 Brookside, Cambridge, United Kingdom where they was