Member of Parliament and father

Colonel Robert Walpole (18 November 1650 – 18 November 1700) of Houghton Hall in Norfolk, was an English Whig politician and Colonel in the militia who served as a Member of Parliament for the borough of Castle Rising, Norfolk, from 1689 to 1700. He is mainly notable for being the father of Robert Walpole, 1st Earl of Orford, considered to have been the first Prime Minister of Great Britain. He is the ancestor of all the Barons Walpole and Earls of Orford, of all creations, and of the present Marquess of Cholmondeley, owner of Houghton Hall. He is also known as the Guinness World Records holder for having the world's longest overdue public library book. 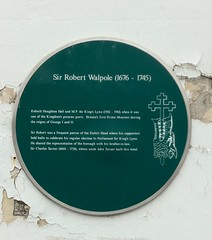 Sir Robert Walpole (1676 - 1745) Rebuilt Houghton Hall and M. P. for Kings Lynn (1702 - 1742) when it was one of the Kingdom's premier ports. Britain's first Prime Minister during the reigns of George I and II. Sir Robert was a frequent patron of the Duke's Head where his supporters held balls to celebrate his regular election to Parliament for King's Lynn. He shared the representation of the borough with his brother-in-law, Sir Charles Turner (1666 - 1738), whose uncle John Turner built this hotel.

The Duke's Head, 5-6 Tuesday Market Place, King's Lynn, United Kingdom where they was