father of modern tropical medicine, Knight Commander of The Most Distinguished Order of Saint Michael and Saint George (1903-1912), and Knight Grand Cross Order of St Michael and St George (from 1912)

Sir Patrick Manson GCMG FRS (3 October 1844 – 9 April 1922) was a Scottish physician who made important discoveries in parasitology, and was a founder of the field of tropical medicine. He graduated from University of Aberdeen with degrees in Master of Surgery, Doctor of Medicine and Doctor of Law. His medical career spanned Taiwan, China, Hong Kong, and London. He discovered that filariasis in humans is transmitted by mosquitoes. This is the foundation of modern tropical medicine, and he is recognized with an epithet "Father of Tropical Medicine". His discovery directly invoked the mosquito-malaria theory, which became the foundation in malariology. He eventually became the first President of the Royal Society of Tropical Medicine and Hygiene. He founded the Hong Kong College of Medicine for Chinese (subsequently absorbed into the University of Hong Kong) and the London School of Hygiene & Tropical Medicine. Manson was inflicted with gout during his service in China. His recurring condition worsened with age. He died in 1922. 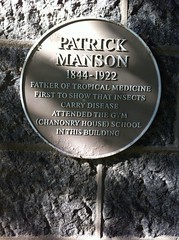 South Road, Oldmeldrum, United Kingdom where they was born (1844)