Robert Curthose or Robert II of Normandy (c. 1051 – 3 February 1134, French: Robert Courteheuse / Robert II de Normandie) was the eldest son of William the Conqueror and succeeded his father as Duke of Normandy in 1087, reigning until 1106. Robert was also an unsuccessful claimant to the throne of the Kingdom of England. The epithet "Curthose" had its origins in the Norman French word courtheuse 'short stockings' and was apparently derived from a nickname given to Robert by his father; the chroniclers William of Malmesbury and Orderic Vitalis reported that William the Conqueror had derisively called Robert brevis-ocrea ("short boot"). Robert's reign as Duke is noted for the discord with his brothers William II and Henry I in England. Robert mortgaged his duchy to finance his participation in the First Crusade, where he was an important commander. Eventually, his disagreements with Henry I led to defeat in battle and lifelong captivity, with Normandy absorbed as a possession of England. 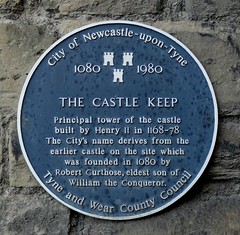 Castle Garth, Newcastle upon Tyne, United Kingdom where they founded (1080)