Marie Charlotte Carmichael Stopes (15 October 1880 – 2 October 1958) was a British author, palaeobotanist and campaigner for eugenics and women's rights. She made significant contributions to plant palaeontology and coal classification, and was the first female academic on the faculty of the University of Manchester. With her second husband, Humphrey Verdon Roe, Stopes founded the first birth control clinic in Britain. Stopes edited the newsletter Birth Control News, which gave explicit practical advice. Her sex manual Married Love (1918) was controversial and influential, and brought the subject of birth control into wide public discourse. Stopes publicly opposed abortion, arguing that the prevention of conception was all that was needed, though her actions in private were at odds with her public pronouncements. As a one of her stated aims was "to furnish security from conception to those who are racially diseased". In reaction to this attitude, Marie Stopes International in 2020 changed its name to "MSI Reproductive Choices" with no other changes. 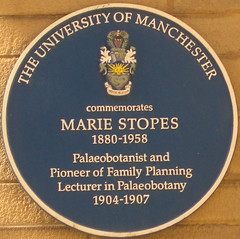 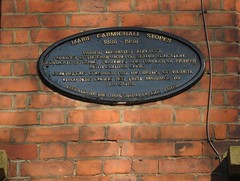 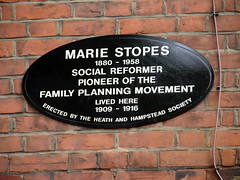 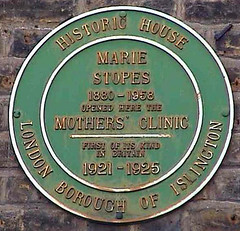 The first birth control clinic was opened by Dr. Marie Stopes in 1921 at Holloway and removed here in 1925

Marie Carmichael Stopes 1880-1958 Writer, dramatist and poet. Publicist of the campaign for sexual education. Advocate of family planning and founder of pioneer birth control clinic. Courageous crusader for the rights of women. Lived here during her first marriage to R.R. Gates.