Robin Hugh Gibb CBE (22 December 1949 – 20 May 2012) was a British singer, songwriter and record producer, who gained worldwide fame as a member of the pop group the Bee Gees with older brother Barry and fraternal twin brother Maurice. Robin Gibb also had his own successful solo career. Their youngest brother Andy was also a singer. Gibb was born in Douglas on the Isle of Man to English parents, Hugh and Barbara Gibb; the family later moved to Manchester for three years (where Andy was born) before settling in Redcliffe, just north of Brisbane, Australia. Gibb began his career as part of the family trio (Barry-Maurice-Robin). When the group found their first success, they returned to England, where they achieved worldwide fame. In 2002, the Bee Gees were appointed as CBEs for their "contribution to music". However, investiture at Buckingham Palace was delayed until 2004. With record sales estimated in excess of 200 million, the Bee Gees became one of the most successful pop groups of all time. Music historian Paul Gambaccini described Gibb as "one of the major figures in the history of British music" and "one of the best white soul voices ever" owing to his distinctive vibrato-laden soulful voice. From 2008 to 2011, Gibb was President of the U.K.-based Heritage Foundation, which honours figures in British culture. After a career spanning six decades, Gibb last performed onstage in February 2012 supporting injured British servicemen at a charity concert at the London Palladium. On 20 May 2012, Gibb died at the age of 62 from liver and kidney failure brought on by colorectal cancer. As an instrumentalist, Gibb primarily played a variety of keyboards, notably piano, organ and Mellotron on the Bee Gees album Odessa (1969); he also played acoustic guitar and organ on his debut solo album Robin's Reign (1970).

band member of The Bee Gees 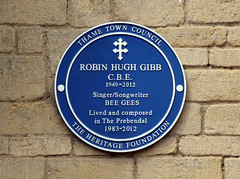 67 Brook Street, London, United Kingdom where they composed and stayed

50 St.Catherine's Drive, Douglas, Isle of Man where they lived