Lajos Kossuth de Udvard et Kossuthfalva (Hungarian: [ˈlɒjoʃ ˈkoʃut], Slovak: Ľudovít Košút, archaically English: Louis Kossuth; 19 September 1802 – 20 March 1894) was a Hungarian nobleman, lawyer, journalist, politician, statesman and Governor-President of the Kingdom of Hungary during the revolution of 1848–49. With the help of his talent in oratory in political debates and public speeches, Kossuth emerged from a poor gentry family into regent-president of Kingdom of Hungary. As the influential contemporary American journalist Horace Greeley said of Kossuth: "Among the orators, patriots, statesmen, exiles, he has, living or dead, no superior." Kossuth's powerful English and American speeches so impressed and touched the famous contemporary American orator Daniel Webster, that he wrote a book about Kossuth's life. He was widely honoured during his lifetime, including in Great Britain and the United States, as a freedom fighter and bellwether of democracy in Europe. Kossuth's bronze bust can be found in the United States Capitol with the inscription: Father of Hungarian Democracy, Hungarian Statesman, Freedom Fighter, 1848–1849. 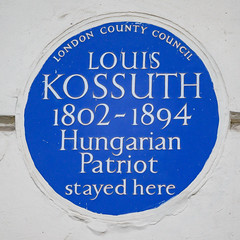