woman, singer, and Dame Commander of the Most Excellent Order of the British Empire (from 1920)

Dame Clara Ellen Butt, DBE (1 February 1872 – 23 January 1936), was an English contralto. Her main career was as a recitalist and concert singer. Her voice, both powerful and deep, impressed contemporary composers such as Saint-Saëns and Elgar; the latter composed a song-cycle with her in mind as soloist. Butt appeared in only two operatic productions, both of Gluck's Orfeo ed Euridice. She wished to sing in Saint-Saëns' Samson and Delilah but was prevented from doing so. Later in her career she frequently appeared in recitals together with her husband, the baritone Kennerley Rumford. She made numerous recordings for the gramophone. 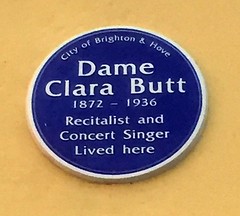 St Aubyns Mansions, Hove, United Kingdom where they was