Arthur Neville Chamberlain FRS (/ˈtʃeɪmbərlɪn/; 18 March 1869 – 9 November 1940) was a British politician of the Conservative Party who served as Prime Minister of the United Kingdom from May 1937 to May 1940. He is best known for his foreign policy of appeasement, and in particular for his signing of the Munich Agreement on 30 September 1938, ceding the German-speaking Sudetenland region of Czechoslovakia to Nazi Germany led by Adolf Hitler. Following the German invasion of Poland on 1 September 1939, which marked the beginning of the Second World War, Chamberlain announced the declaration of war on Germany two days later and led the United Kingdom through the first eight months of the war until his resignation as prime minister on 10 May 1940. After working in business and local government, and after a short spell as Director of National Service in 1916 and 1917, Chamberlain followed his father Joseph Chamberlain and elder half-brother Austen Chamberlain in becoming a Member of Parliament in the 1918 general election for the new Birmingham Ladywood division at the age of 49. He declined a junior ministerial position, remaining a backbencher until 1922. He was rapidly promoted in 1923 to Minister of Health and then Chancellor of the Exchequer. After a short-lived Labour-led government, he returned as Minister of Health, introducing a range of reform measures from 1924 to 1929. He was appointed Chancellor of the Exchequer in the National Government in 1931. Chamberlain succeeded Stanley Baldwin as prime minister on 28 May 1937. His premiership was dominated by the question of policy towards an increasingly aggressive Germany, and his actions at Munich were widely popular among the British at the time. In response to Hitler's continued aggression, Chamberlain pledged the United Kingdom to defend Poland's independence if the latter were attacked, an alliance that brought his country into war after the German invasion of Poland. The failure of Allied forces to prevent the German invasion of Norway caused the House of Commons to hold the historic Norway Debate in May 1940. Chamberlain's conduct of the war was heavily criticised by members of all parties and, in a vote of confidence, his government's majority was greatly reduced. Accepting that a national government supported by all the main parties was essential, Chamberlain resigned the premiership because the Labour and Liberal parties would not serve under his leadership. Although he still led the Conservative Party, he was succeeded as prime minister by his colleague Winston Churchill. Until ill health forced him to resign on 22 September 1940, Chamberlain was an important member of the war cabinet as Lord President of the Council, heading the government in Churchill's absence. Chamberlain died aged 71 on 9 November 1940 of cancer, six months after leaving the premiership. Chamberlain's reputation remains controversial among historians, the initial high regard for him being entirely eroded by books such as Guilty Men, published in July 1940, which blamed Chamberlain and his associates for the Munich accord and for allegedly failing to prepare the country for war. Most historians in the generation following Chamberlain's death held similar views, led by Churchill in The Gathering Storm. Some later historians have taken a more favourable perspective of Chamberlain and his policies, citing government papers released under the thirty-year rule and arguing that going to war with Germany in 1938 would have been disastrous as the UK was unprepared. Nonetheless, Chamberlain is still unfavourably ranked amongst British prime ministers. 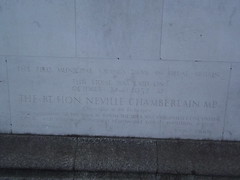 The first municipal savings bank in Great Britain This stone was laid on October 22nd 1932 by The Rt. Hon Neville Chamberlain. M.P. Chancellor of the Exchequer. First chairman of the bank by whom the idea was originally conceived and who was principally responsible for its initiation