statesman, father of responsible government in Canada, and co-premier of the united Canadas

Robert Baldwin (May 12, 1804 – December 9, 1858) was a Canadian lawyer and politician who, with his political partner Louis-Hippolyte Lafontaine, led the first responsible ministry in Canada. "Responsible Government" marked the country's democratic independence, without a revolution, although not without violence. This achievement also included the introduction of municipal government, the introduction of a modern legal system and the Canadian Jury system, and the abolishing of imprisonment for debt. Baldwin is also noted for resisting a decades-long tradition of Orange Order terrorism of political reform in the colony, that went so far as to burn the Parliament buildings in Montreal in 1849.

The Baldwin Family Looking south, one can see Spadina Road, laid out by the Baldwin fam...
Toronto, ON, Canada 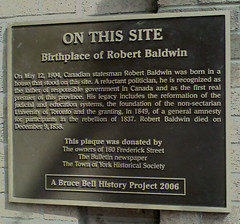 The Baldwin Family Looking south, one can see Spadina Road, laid out by the Baldwin family as a grand thoroughfare from Queen Street to Davenport Road. William Baldwin (1775-1844), physician, lawyer, politician and architect built the first "Spadina" in 1818 and the second in 1835 after the earlier home was destroyed by fire. After William's death the estate passed to his son Robert Baldwin (1804-1858) one time co-premier of the united Canadas. Both men were leading political figures whose drive for peaceful change brought about major constitutional and administrative reform in government including the implementation of "responsible government" initiated by William Baldwin.

Baldwin Steps at Davenport Road and Spadina Road, Toronto, ON, Canada where they was

Birthplace of Robert Baldwin On May 12, 1804, Canadian statesman Robert Baldwin was born in a house that stood on this site. A reluctant politician, he is recognized as the father of responsible government in Canada and as the first real premier of this province. His legacy includes the reformation of the judicial and education systems, the foundation of the non-sectarian University of Toronto and the granting, in 1849, of a general amnesty for participants in the rebellion of 1837. Robert Baldwin died on December 9, 1858.