Fellow of the Royal Society, chemist, physicist, inventor of the incandescent light bulb, and Knight Bachelor (from 1904)

Sir Joseph Wilson Swan FRS (31 October 1828 – 27 May 1914) was an English physicist, chemist, and inventor. He is known as an independent early developer of a successful incandescent light bulb, and is the person responsible for developing and supplying the first incandescent lights used to illuminate homes and public buildings, including the Savoy Theatre, London, in 1881. In 1904, Swan was knighted by King Edward VII, awarded the Royal Society's Hughes Medal, and was made an honorary member of the Pharmaceutical Society. He had received the highest decoration in France, the Legion of Honour, when he visited the 1881 International Exposition of Electricity, Paris. The exhibition included displays of his inventions, and the city was lit with his electric lighting. 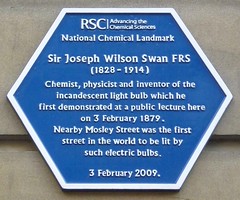 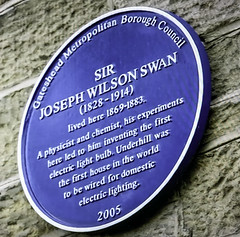 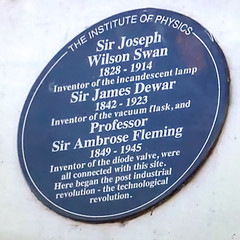 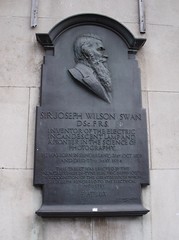 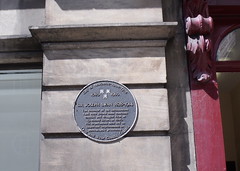 Sir Joseph Wilson Swan FRS (1828-1914) Chemist, physicist and inventor of the incandescent light bulb which he first demonstrated at a public lecture here on 3 February 1879. Nearby Mosley Street was the first street in the world to be lit by such electric bulbs.

The Lit & Phil, 23 Westgate Road, Newcastle upon Tyne, United Kingdom where they first demonstrated the incandescent light bulb at a public lecture

Sir Joseph Wilson Swan (1828-1914) lived here 1869-1883. A physicist and chemist, his experiments here led to him inventing the first electric light bulb. Underhill was the first house in the world to be wired for domestic electric lighting.

Sir Joseph Wilson Swan D.Sc. F.R.S. Inventor of the electric incandescent lamp and a pioneer in the science of photography. He was born in Sunderland 31st Oct., 1828 and died 27th. May 1914. This tablet was erected by the Newcastle-upon-Tyne Electric Supply Co., Ltd., in recognition of the great services which Sir Joseph rendered to the electrical industry. Fiat Lux. Richard A. Ray 1931 A.R.C.A

Pilgrim Street, Newcastle upon Tyne, United Kingdom where they was

Mosley Street, Newcastle upon Tyne, United Kingdom where they worked