Louis-Napoléon Bonaparte (born Charles-Louis Napoleon Bonaparte; 20 April 1808 – 9 January 1873) was the only President (1848–52) of the French Second Republic and, as Napoleon III, the Emperor (1852–70) of the Second French Empire. He was the nephew and heir of Napoleon I. He was the first President of France to be elected by a direct popular vote. He was blocked by the Constitution and Parliament from running for a second term, so he organized a coup d'état in 1851 and then took the throne as Napoleon III on 2 December 1852, the forty-eighth anniversary of Napoleon I's coronation. He remains the longest-serving French head of state since the French Revolution. During the first years of the Empire, Napoleon's government imposed censorship and harsh repressive measures against his opponents. Some six thousand were imprisoned or sent to penal colonies until 1859. Thousands more went into voluntary exile abroad, including Victor Hugo. From 1862 onwards, he relaxed government censorship, and his regime came to be known as the "Liberal Empire." Many of his opponents returned to France and became members of the National Assembly. Napoleon III is best known today for his grand reconstruction of Paris, carried out by his prefect of the Seine Baron Haussmann. He launched similar public works projects in Marseille, Lyon, and other French cities. Napoleon III modernized the French banking system, greatly expanded and consolidated the French railway system, and made the French merchant marine the second largest in the world. He promoted the building of the Suez Canal and established modern agriculture, which ended famines in France and made France an agricultural exporter. Napoleon III negotiated the 1860 Cobden–Chevalier free trade agreement with Britain and similar agreements with France's other European trading partners. Social reforms included giving French workers the right to strike and the right to organize. Women's education greatly expanded, as did the list of required subjects in public schools. In foreign policy, Napoleon III aimed to reassert French influence in Europe and around the world. He was a supporter of popular sovereignty and of nationalism. In Europe, he allied with Britain and defeated Russia in the Crimean War (1853–56). His regime assisted Italian unification and, in doing so, annexed Savoy and the County of Nice to France; at the same time, his forces defended the Papal States against annexation by Italy. Napoleon doubled the area of the French overseas empire in Asia, the Pacific, and Africa. On the other hand, his army's intervention in Mexico aimed to create a Second Mexican Empire under French protection but ended in failure. Beginning in 1866, Napoleon had to face the mounting power of Prussia, as Chancellor Otto von Bismarck sought German unification under Prussian leadership. In July 1870, Napoleon entered the Franco-Prussian War without allies and with inferior military forces. The French army was rapidly defeated and Napoleon III was captured at the Battle of Sedan. The French Third Republic was proclaimed in Paris, and Napoleon went into exile in England, where he died in 1873. 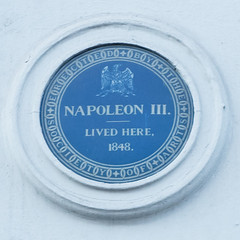 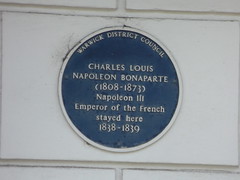 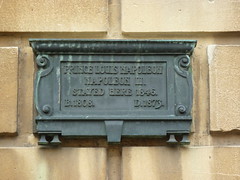 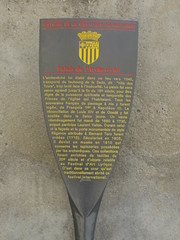 English translation: Palace of the Archbishop The archbishop was established in this place around 1340, transported from the suburb of the Seds, called “City of Tours”, too isolated in the face of the insecurity. The Palace was constantly enlarged until the end of the 18th century, to be worthy of the spiritual and temporal power of the Princes of the Church who inhabited it. All the French rulers passing through Aix were housed there, from Francis 1st to Napoleon III. The reconciliation of Louis XIV and Condé was sealed in the Yellow Salon. A major redevelopment was carried out from 1650 to 1730, in which Laurent Vallon participated. During cellici the façade and the monumental Regency-style door attributed to Bernard Toro were created (1715). Secularized in 1905, it became a museum in 1910 that preserves the tapestries owned by the archbishops. These collections were enriched with 20th century textiles and objects related to the Lyric Art Festival. This international festival is traditionally housed in its courtyard. [AWS Translate]

Lord Street Boulevard The exiled Prince Louis Napoleon lived in Southport in 1838 and admired the long straight wide tree-lined Lord Street. Later he remembered Lord Street's elegance when he returned to France as Emperor and he transformed Paris with its now famous Boulevards.