Sir William de la Pole (died 21 June 1366) was a wealthy wool merchant from Kingston upon Hull in Yorkshire, England, who became a royal moneylender and briefly served as Chief Baron of the Exchequer. He founded the de la Pole family, Earls of Lincoln, Earls of Suffolk and Dukes of Suffolk, which by his mercantile and financial prowess he raised from relative obscurity to one of the primary families of the realm in a single generation. At the end of the 14th century he was described in the 'Chronicle of Melsa' as "second to no other merchant of England" (nulli Angligenae mercatori postea secundus fuit). He was the founder of the Charterhouse Monastery, Kingston upon Hull. 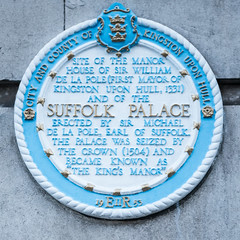 Site of the manor house of Sir William de la Pole (first mayor of Kingston upon Hull, 1331) and of the Suffolk Palace erected by Sir Michael de la Pole, Earl of Suffolk. The palace was seized by the Crown (1504) and became known as "The King's Manor"

Corner of Lowgate and Alfred Gelder Street, Hull, United Kingdom where they lived