Edgar Allan Poe (/poʊ/; born Edgar Poe; January 19, 1809 – October 7, 1849) was an American writer, editor, and literary critic. Poe is best known for his poetry and short stories, particularly his tales of mystery and the macabre. He is widely regarded as a central figure of Romanticism in the United States and American literature as a whole, and he was one of the country's earliest practitioners of the short story. Poe is generally considered the inventor of the detective fiction genre and is further credited with contributing to the emerging genre of science fiction. He was the first well-known American writer to try to earn a living through writing alone, resulting in a financially difficult life and career. Poe was born in Boston, the second child of two actors. His father abandoned the family in 1810, and his mother died the following year. Thus orphaned, the child was taken in by John and Frances Allan of Richmond, Virginia. They never formally adopted him, but Poe was with them well into young adulthood. Tension developed later as John Allan and Edgar repeatedly clashed over debts, including those incurred by gambling, and the cost of secondary education for the young man. Poe attended the University of Virginia for one semester but left due to lack of money. Poe quarreled with Allan over the funds for his education and enlisted in the Army in 1827 under an assumed name. It was at this time that his publishing career began, albeit humbly, with the anonymous collection of poems Tamerlane and Other Poems (1827), credited only to "a Bostonian". With the death of Frances Allan in 1829, Poe and Allan reached a temporary rapprochement. However, Poe later failed as an officer cadet at West Point, declaring a firm wish to be a poet and writer, and he ultimately parted ways with John Allan. Poe switched his focus to prose and spent the next several years working for literary journals and periodicals, becoming known for his own style of literary criticism. His work forced him to move among several cities, including Baltimore, Philadelphia, and New York City. In Richmond in 1836, he married Virginia Clemm, his 13-year-old cousin. In January 1845, Poe published his poem "The Raven" to instant success. His wife died of tuberculosis two years after its publication. For years, he had been planning to produce his own journal The Penn (later renamed The Stylus), though he died before it could be produced. Poe died in Baltimore on October 7, 1849, at age 40; the cause of his death is unknown and has been variously attributed to alcohol, brain congestion, cholera, drugs, heart disease, rabies, suicide, tuberculosis, and other agents. Poe and his works influenced literature in the United States and around the world, as well as in specialized fields such as cosmology and cryptography. Poe and his work appear throughout popular culture in literature, music, films, and television. A number of his homes are dedicated museums today. The Mystery Writers of America present an annual award known as the Edgar Award for distinguished work in the mystery genre. 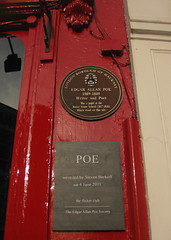 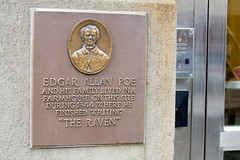 To the memory of Edgar Allan Poe who spent his last days in this house.
Baltimore, MD, United States

1809 1849 Edgar Allan Poe poet - storywriter - critic Born on Carver Street January 19, 1809, to David and Elizabeth (Eliza) Poe, actors at the Boston Theatre. In 1827 published his first book, Tamerlane and Other Poems, at a shop on the corner of Washington and State Streets and enlisted in the U.S. Army at Fort Independence, Boston Harbour. Lectured in Boston October 16, 1845. Published 'Landor's Cottage', his last tale, in Boston's Flag Of Our Union, June 9, 1849. Died at Baltimore October 7, 1849.

Carver Street, Boston, MA, United States where they was born near (1809)

EDGAR ALLAN POE Born 1809, Died 1849 American romancer, poet & critic Was a pupil At the Manor House School Which stood near this spot During his boyhood 1817-1820 Erected 1949 the centenary of his death

Site of Poe's death. This structure, now the east building of Church Hospital, was erected in 1836 to house the Washington Medical College. Edgar Allan Poe, author and poet, was brought here, ill and semi-conscious, on October 3, 1849 and died four days later in 1857. The building was purchased by Church Home and Infirmary, which was renamed Church Home and Hospital in 1943.

The Latrobe House. On an evening in October, 1833, three of Baltimore's most discerning gentlemen were gathered around a table in the back parlor of this house. Fortified with "some old wine and some good cigars," John Pendleton Kennedy, James H. Miller and John H. B. Latrobe poured over manuscripts submitted in a literary contest sponsored by the Baltimore Sunday Visitor. Their unanimous choice for best prose tale was "M8. Found in a Bottle," a curious and haunting tale of annihilation. The fifty dollar prize was awarded to the story's unknown, penniless author Edgar Allan Poe. Poe had come to Baltimore in the spring of 1831, after his dismissal from West Point. He had no money, no trade and no reputation. The four years he spent in Baltimore were a period of intense creativity. His major effort during those years were sixteen tales he wrote for the Folio Club, an imaginary literary club of his creation. One of these sixteen tales was "M8. Found in a Bottle." The prize for this story, the public recognition that it brought and the lifelong friendship it generated between Poe and literary patron Kennedy helped to launch Poe on his brilliant career. He left Baltimore in 1835 to become editor of the Southern Literary Messenger.

, Baltimore, MD, United States where they lived near

To the memory of Edgar Allan Poe who spent his last days in this house.