Gerard Manley Hopkins SJ (28 July 1844 – 8 June 1889) was an English poet and Jesuit priest, whose posthumous fame placed him among leading Victorian poets. His prosody – notably his concept of sprung rhythm – established him as an innovator, as did his praise of God through vivid use of imagery and nature. Only after his death did Robert Bridges publish a few of Hopkins's mature poems in anthologies, hoping to prepare for wider acceptance of his style. By 1930 Hopkins's work was seen as one of the most original literary advances of his century. It intrigued such leading 20th-century poets as T. S. Eliot, Dylan Thomas, W. H. Auden, Stephen Spender and Cecil Day-Lewis. 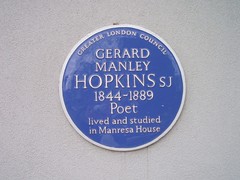 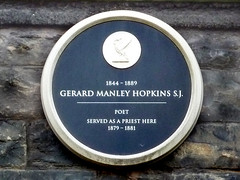 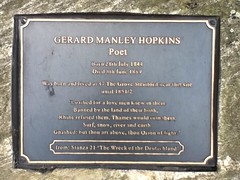 Merrion Square South, Dublin, Ireland where they Professor of Greek

Gerard Manley Hopkins, poet, born 28th July 1844, died 8th June 1889, was born and lived at 87 The Grove Stratford near this site until 1851/2. 'Loathed for a love men knew in them, Banned by the land of their birth, Rhine refused them. Thames would ruin them; Surf, snow, river and earth Gnashed: but thou art above, thou Orion of light.' From: Stanza 21 'The Wreck of the Deutschland'