Sir Isaac Newton FRS (/ˈnjuːtən/; 25 December 1642 – 20 March 1726/27) was an English physicist and mathematician (described in his own day as a "natural philosopher") who is widely recognised as one of the most influential scientists of all time and a key figure in the scientific revolution. His book Philosophiæ Naturalis Principia Mathematica ("Mathematical Principles of Natural Philosophy"), first published in 1687, laid the foundations for classical mechanics. Newton made seminal contributions to optics, and he shares credit with Gottfried Wilhelm Leibniz for the development of calculus. Newton's Principia formulated the laws of motion and universal gravitation, which dominated scientists' view of the physical universe for the next three centuries. By deriving Kepler's laws of planetary motion from his mathematical description of gravity, and then using the same principles to account for the trajectories of comets, the tides, the precession of the equinoxes, and other phenomena, Newton removed the last doubts about the validity of the heliocentric model of the Solar System. This work also demonstrated that the motion of objects on Earth and of celestial bodies could be described by the same principles. His prediction that Earth should be shaped as an oblate spheroid was later vindicated by the measurements of Maupertuis, La Condamine, and others, which helped convince most Continental European scientists of the superiority of Newtonian mechanics over the earlier system of Descartes. Newton built the first practical reflecting telescope and developed a theory of colour based on the observation that a prism decomposes white light into the many colours of the visible spectrum. He formulated an empirical law of cooling, studied the speed of sound, and introduced the notion of a Newtonian fluid. In addition to his work on calculus, as a mathematician Newton contributed to the study of power series, generalised the binomial theorem to non-integer exponents, developed a method for approximating the roots of a function, and classified most of the cubic plane curves. Newton was a fellow of Trinity College and the second Lucasian Professor of Mathematics at the University of Cambridge. He was a devout but unorthodox Christian, and, unusually for a member of the Cambridge faculty of the day, he refused to take holy orders in the Church of England, perhaps because he privately rejected the doctrine of the Trinity. Beyond his work on the mathematical sciences, Newton dedicated much of his time to the study of biblical chronology and alchemy, but most of his work in those areas remained unpublished until long after his death. In his later life, Newton became president of the Royal Society. Newton served the British government as Warden and Master of the Royal Mint. 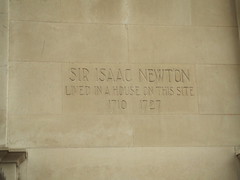 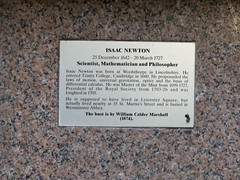 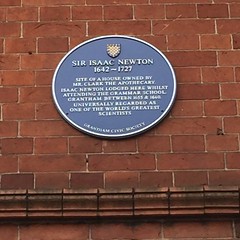 Woolsthorpe Manor, Woolsthorpe by Colsterworth, United Kingdom where they was born (1642)

Isaac Newton, 25 December 1642 - 20 March 1727, Scientist, Mathematician, Philosopher. Isaac Newton was born at Woolsthorpe in Lincolnshire. He entered Trinity College, Cambridge in 1660. He propounded the laws of motion, universal gravitation, optics and the basis of differential calculus. He was Master of the Mint from 1699 - 1727, President of the Royal Society from 1703 - 26 and was knighted in 1705. He is supposed to have lived in Leicester Square, but actually lived nearby at 35 St. Martin's Street, and is buried in Westminster Abbey. The bust is by William Calder Marshall (1874).

In the hall of The King's School, Isaac Newton was taught 1654 - 1660. This plaque was set up to mark the tercentenary visit of The Royal Society 1960

Sir Isaac Newton 1642 - 1727 site of a house owned by Mr. Clark the apothecary. Isaac Newton lodged here whilst attending the Grammar School, Grantham, between 1655 and 1660. Universally regarded as one of the world's greatest scientists.

Woolsthorpe Manor, Woolsthorpe by Colsterworth, United Kingdom where they was

Orange Street Congregational Church This church was founded in 1693 by Huguenot refugees who fled from France at the time of the Revocation of the Edict of Nantes. In 1776 the Chapel passed into the hands of the Church of England. The Rev. Augustus III. Toplady author of "Rock of Ages" was one of its ministers. The Chapel passed into the hands of the Congregationalists in 1787. Adjoining the chapel was Sir Isaac Newtons house which was built in 1710 and condemned in 1913. Mrs Jemima Luke, author of the beloved hymn "I think when we read that sweet story of old" was a teacher in the Sunday School. A copy of the hymn in her own handwriting is in possession of the church.

Orange Street, London, United Kingdom where they was

In the hall of this school Sir Isaac Newton was taught

Church Street, Grantham, United Kingdom where they was taught