Rufus Daniel Isaacs, 1st Marquess of Reading, GCB, GCSI, GCIE, GCVO, PC (10 October 1860 – 30 December 1935) was a British Liberal politician and judge, who served as Lord Chief Justice of England, Viceroy of India, and Foreign Secretary, the last Liberal to hold that post. The second practising Jew to be a member of the British cabinet (the first being Herbert Samuel, who was also a member of H. H. Asquith's government), Isaacs was the first Jew to be Lord Chief Justice, and the first, and as yet, only British Jew to be raised to a marquessate. 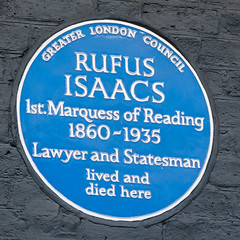