Sir Joshua Reynolds PRA FRS FRSA (16 July 1723 – 23 February 1792) was an English painter, specialising in portraits. John Russell said he was one of the major European painters of the 18th century. He promoted the "Grand Style" in painting which depended on idealization of the imperfect. He was a founder and first president of the Royal Academy of Arts, and was knighted by George III in 1769.

founder of The Club 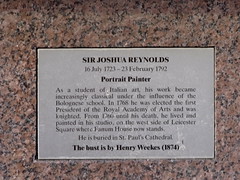 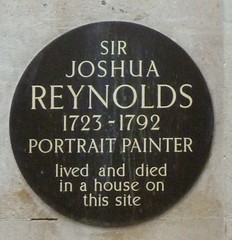 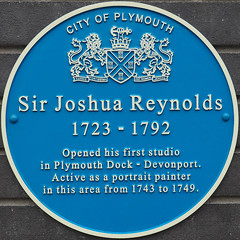 Sir Joshua Reynolds, 16 July 1723 - 23 February 1792, Portrait Painter. As a student of Italian art, his work became increasingly classical under the influence of the Bolognese school. In 1768 he was elected the first President of the Royal Academy of Arts and was knighted. From 1760 until his death, he lived and painted in his studio, on the west side of Leicester Square where Fanum House now stands. He is buried in St. Paul's Cathedral. The bust is by Henry Weekes (1874)