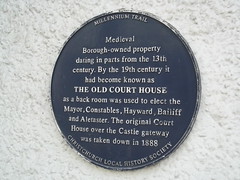 Medieval Borough-owned property dating in parts from the 13th century. By the 19th century it had become known as THE OLD COURT HOUSE as a back room was used to elect the Mayor, Constables, Hayward, Bailiff and Aletaster. The original Court House over the Castle gateway was taken down in 1888