alderman, Justice of the Peace, and postmaster 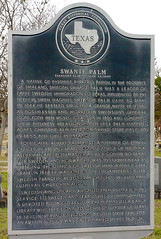 Swante Palm. (January 31, 1815 - June 22, 1899) A native of Basthult, Barkeryd Parish, in the province of Smaland, Sweden, Swante Palm was a leader of early Swedish immigration to Texas. Influenced by his nephew, Swen Magnus Swenson, Palm came to Texas in 1844. He settled first in La Grange, where he served as postmaster and worked in Swenson's general store. Both men moved to Austin in 1850 and continued their business relationship. In 1854 Palm married Agnes Christine Alm. Their son, Swante Sture, was born in 1855, but died in infancy. Politically active, Palm held a number of public offices, including Travis County justice of the peace, alderman, and postmaster. As vice consul to Texas for Sweden and Norway, he was instrumental in bringing thousands of Swedish immigrants to the state. In 1868 he was one of the organizers of the Swedish Evangelical Lutheran Church (now Gethsemane Lutheran Church) in Austin. Swedish king Oscar II knighted Palm in 1884 for his service to Sweden and Texas' Swedish immigrants. A devoted book collector, Palm amassed a large library which he donated to the University of Texas in 1897, increasing its holdings by over sixty percent. An Austin school was later named in his honor. (1990) #15675