engineer and founder of the Lunar Society

Matthew Boulton FRS (/ˈboʊltən/; 3 September 1728 – 17 August 1809) was an English manufacturer and business partner of Scottish engineer James Watt. In the final quarter of the 18th century, the partnership installed hundreds of Boulton & Watt steam engines, which were a great advance on the state of the art, making possible the mechanisation of factories and mills. Boulton applied modern techniques to the minting of coins, striking millions of pieces for Britain and other countries, and supplying the Royal Mint with up-to-date equipment. Born in Birmingham, he was the son of a Birmingham manufacturer of small metal products who died when Boulton was 31. By then Boulton had managed the business for several years, and thereafter expanded it considerably, consolidating operations at the Soho Manufactory, built by him near Birmingham. At Soho, he adopted the latest techniques, branching into silver plate, ormolu and other decorative arts. He became associated with James Watt when Watt's business partner, John Roebuck, was unable to pay a debt to Boulton, who accepted Roebuck's share of Watt's patent as settlement. He then successfully lobbied Parliament to extend Watt's patent for an additional 17 years, enabling the firm to market Watt's steam engine. The firm installed hundreds of Boulton & Watt steam engines in Britain and abroad, initially in mines and then in factories. Boulton was a key member of the Lunar Society, a group of Birmingham-area men prominent in the arts, sciences, and theology. Members included Watt, Erasmus Darwin, Josiah Wedgwood and Joseph Priestley. The Society met each month near the full moon. Members of the Society have been given credit for developing concepts and techniques in science, agriculture, manufacturing, mining, and transport that laid the groundwork for the Industrial Revolution. Boulton founded the Soho Mint, to which he soon adapted steam power. He sought to improve the poor state of Britain's coinage, and after several years of effort obtained a contract in 1797 to produce the first British copper coinage in a quarter century. His "cartwheel" pieces were well-designed and difficult to counterfeit, and included the first striking of the large copper British penny, which continued to be coined until decimalisation in 1971. He retired in 1800, though continuing to run his mint, and died in 1809. His image appears alongside James Watt on the Bank of England's new Series F £50 note. 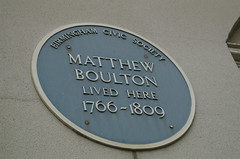 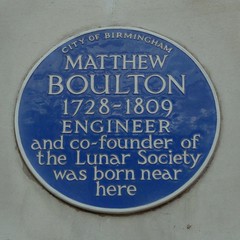 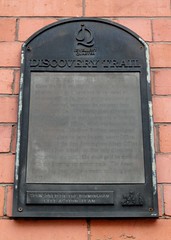 corner of Steelhouse Lane and Priory Queensway, Birmingham, United Kingdom where they was born (1728)

Birmingham Assay Office. Since the 14th century in Britain articles of silver and gold have had to be tested at an assay office for metal purity standard and there hallmarked to protect the customer from fraud. Until the 1750s Birmingham's silversmiths and jewellers had to send their goods to London or Chester assay offices, which was inconvenient and expensive. Matthew Boulton campaigned for Birmingham to have its own Assay Office. In 1773 the first Birmingham Assay Office was opened on New Street. At first only silver was hallmarked not until 1824 could gold be marked with the Birmingham anchor mark. The Assay office has been in the present building since 1878.

Corner of Charlotte Street and Newhall Street, Birmingham, United Kingdom where they campaigned for Birmingham to have its own Assay Office